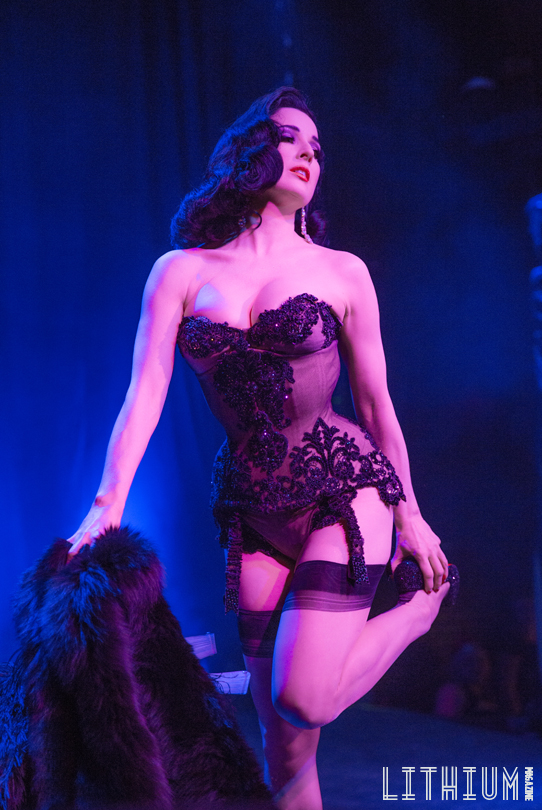 Regardless of how you spent your Valentine’s Day earlier this month, February 20th just became the sexiest day of the year.  Particularly so for Torontonians who had the privilege of witnessing the reigning Queen of Burlesque, fashion icon Dita Von Teese (real name Heather Sweet), as she made back to back appearances in Toronto.

Teese’s book signing happened at the retro and vintage clothing boutique Rosie the Rebel, which has to be the best venue to host such a signing. The nature of Teese’s book Your Beauty Mark, is a straight-forward detailed ‘how-to’ on becoming just like her.  In it, Teese shares secrets for makeup, hair, fashion, nutrition, fitness, and skin care. It’s everything a fan would need to know about how Heather Sweet becomes Dita Von Teese.

Approximately 300 fans showed up for the 1 pm signing and soon the line snaked down the block.  While fans waited, they discussed Teese while making quick fixes to their styled victory rolls and ruby red pout.  I mean, a fan must look her best after all when in the presence of greatness.

Teese’s arrival to the shop was met with the expected camera flashes and cheers from the fans. Her personality is quite subdued, which adds to her allure and sensuality.  She allows her body and presence to speak for her, rather than being verbose. She quietly greeted the Rosie the Rebel staff, and was given a walk-through of the shop before she took her seat at the back signing table. Taking a copy of her book, she posed for a few shots for the gathered media, all without much to say. Without pre-amble to introduce her book or herself, the signing began. Fans received a quick personal message before she posed with them for a quick shot from the in-house photographer, friends, or a selfie.

Later that night, the line-up for the Phoenix once again was extensive, stretching down Sherbourne St. as fans of Teese, of burlesque, and of people just wanting to get their kink on.

The two-hour show featured the crème de la crème of burlesque talent from Toronto and Ottawa – from Sauci Calla Harra, who founded and produced The Toronto Burlesque Festival, to Tanya Cheex who founded Toronto’s longest running burlesque troupe Skin Tight Outta Sight in 1998 and was the first inductee to the Canadian Burlesque Hall of Fame.

The performance was an absolute delight as these lovely ladies strutted, stripped, high kicked, pole-twirled, and even belched their ways into the audiences’ heart. The show was emceed by the lovely Laura Desiree, who had a wonderful way with words and made her stage banter a delight to listen to between acts.

Dolly Berlin injected plenty of humor into her Dolly Pop act. Her number required her to mimic the act of drinking a comically large bottle of “Dolly Pop” soda (while paying suggestive attention to her straw) which proceeded to give her a horrible case of the belches. After apologetically burping her way through a strip routine, she decided to simply own her misfortune and burp her way to a fantastic finish.

A downturn in the show for me was when the Sentimentalists took the stage with mentalists Mysterion and Steffi Kay. Their act is audience involved mind-reading, which reduced the energy that had been coming from the crowd. Their microphones were indeed hot and hissed, and cracked and popped throughout their bit. Also, their reading of an audience member’s mind used rather small reveals (small objects, playing cards) that were difficult to see from the midst of the large crowd. Mysterion could have “read” anything and it would have worked in the context of the trick. I found myself getting bored rather quick.

Finally Teese came out to close the first act and the crowd went wild. As she slowly slid herself out of a dazzling crystal-studded gown to reveal crystal-studded barely-there lingerie underneath, she completed her number with a mesmeric fan dance using two massive lavender plumed Vegas show girl fans, which I simply am a sucker for.

In the second act, the costumes that came out were bigger and better than before in particular Scarlett BoBo‘s bold and beautiful Queen of Hearts dress that included a gorgeous spinning reveal from glittery red heart to glittery red gown. The Harlettes delivered an adorable yet cheeky – pun intended – number as three Disney princesses (Cinderella, Snow White and Belle) who stripped down to reveal a rather unique way of using pasties — on their rear ends.

The standout performance of the second act was Zyra Lee Vanity. Her bold and dynamic costume choices stood out for me as well as her interesting song choice, a remixed version of the opening to The Lion King. Her performance was strong and powerful; she commanded that stage. ‘Fierce’ is a term so often overused but here, Zyra owned it. Gorgeous!

Closing the show, and to top off a full Dita Von Teese experience, her grand finale was a number I, as a long-time fan had never thought I would get to see in person, the Swarovski studded martini glass routine. Teese went from boudoir robe to barely-there lingerie before she climbed up and slid seductively into the glass. She splashed around in the water and used the sponge olive to squeeze water over herself. It sounds simple but it’s stunning to watch; absolutely magnificent.

As someone who has adored the art of burlesque for years, I’ve never had an experience or seen a performance quite like this. From Dita Von Teese, the reining Burlesque Queen herself, to the best that the local scenes had to offer, it was simply superb.