When a great performer like Ed Sheeran comes to the stage, what you see is what you get. By that, the British singer, who’s also known to be the ginger with a soul, is a one-man show at every concert when on tour.

Only releasing two full-feature length albums + (“Plus”) and x (“Multiply”), Sheeran has already traveled the world to brighten up his fans lives for one or two shows in approximately two hours. But in his new diary-like documentary film, Ed Sheeran: Jumpers for Goalposts, he performs three shows at the Wembley Stadium for his x Tour and for his UK fans, as part of an homage to coming home.

Known for popular songs like “The A Team” and “Thinking Out Loud,” in this film, we watch Sheeran behind the scenes during his tour and how he was able to make his birthday wish to perform at Wembley Stadium come true. With backstage interviews from his tour crew, his videographer cousin and Sheeran himself, we witness the journey and hard work that went into putting this act together for three consecutive sold-out nights. It also includes a close and intimate reflection by Sheeran on just how far he has come in his career.

For those who’ve actually witnessed Sheeran live in concert for his x Tour, this film is a reminder of what it was like to be in the audience and sing along to his songs. Fans will acknowledge the fact that at every concert, Sheeran is on stage by himself with his acoustic guitars and his loop station, while donning a simple plaid shirt.

Although it seems unnecessary for another artist to make a film while on tour like Justin Bieber, Katy Perry and the Jonas Brothers did a couple years back, Sheeran’s story is different. As previously mentioned, Sheeran has only released two full-feature length albums, but the fact that he has already performed at the Wembley Stadium for not one, not two, but three shows, it proves that he has already conquered so much in the beginning of his very early career and still continues to rise, while remaining so humble and loyal.

This special event is an invitation for Sheeran’s fans around the world to join him, to sing his music and celebrate what he has achieved so far, before he loves the goalposts once more. As an additional bonus, but for one night only, there will be a live event beamed via satellite from London’s Leicester on Thursday October 22, 2015.

Ed Sheeran: Jumpers for Goalposts will only be in select cinemas worldwide from October 23 to 25, 2015. 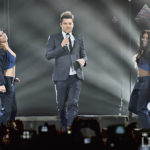 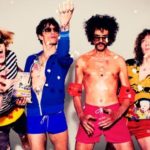 Enter to Win a Pair of Tickets to see The Darkness at The Phoenix in Toronto – October 23rd, 2015