Didn’t get a chance to go to Comicon this year? Hopefully you had a chance to make up for that with the Suicide Girls’ nerd-infused Blackheart Burlesque show.

Following up the anticipation from our preview interview with Suicide Girls’ founder Missy Suicide, the Blackheart Burlesque show finally hit Toronto and delivered on every juicy promise that Missy had eluded to during our chat.

From Star Wars and Game Of Thrones to some adult oriented spoofs on Harry Potter and The Little Mermaid, the Blackheart Burlesque incorporates it all and is easily a work of some steamy fan-fiction played out for all to see.

The evening was hosted by Sunny Suicide, who began the show by hyping the crowd and encouraging everyone to take as many picture as they’d like. She provided some hilarious bits throughout the night and worked the stage in her various solo performances. Ever fantasize about Hermione Granger or Ariel performing a full striptease? It happened. And Sunny has a stellar voice to boot.

Her natural ability to work the crowd, both sexually and in a hype sense, pulled everyone in. Jaws dropped when she pulled a male show goer on stage for a special performance. Asking for a smart guy to come up, she handed him a Grade 5 level reading assignment and simply told him to read it. The goal was to avoid becoming distracted… while Sunny stripped down in front of him as she used him for a prop.

Needless to say, this coupled with some female crowd members being invited on stage to do their own strip tease, showcased the level of integration the show offers. This has to be the show to volunteer for.

Many of the night’s performances were Time Warps to some of entertainment’s most memorable pieces of work. Beetlejuice, Fight Club, The Rocky Horror Picture Show, and Michael Jackson’s Thriller were highlights of the night and displayed the variety in the overall show.

Music from Die Antwoord, Nine Inch Nails, MIA, Arctic Monkeys, made the performance seem that much more relatable and intriguing. Nerds in the crowd got a kick out of the Legend of Zelda striptease that was laced with a heavy dubstep remix of the game’s theme song.

But, the obvious reason to attend the Blackheart Burlesque show is the gorgeous dancers. Those who have followed Suicide Girls over the years should be no strangers to the diversity in their models. They are unconventional, punk chicks who are confident with who they are. Tattoos and vibrant hair colour is easy to pick out, but it’s their presence on stage that forces you to watch. The dancers were sexy and no one was ashamed for watching. The dancing was incredibly well organized and made it feel more like a show rather than an amateurish striptease.

It’s that aspect that led me to the epiphany I had during the show. The crowd was almost equally mixed in gender. I worried the show would be a room full of guys constantly wiping the drool from the mouths and cat calling all night. It wasn’t. The women were just as into the show as the guys were, and the Suicide Girls ate it up. The crowd was supportive in every way and it wasn’t awkwardly claustrophobic like I imagined it could have been. It was a relieving surprise that allowed me to enjoy myself.

The Blackheart Burlesque performance sets the standard for what sexy is. While it is highly sexual in its content and intentions, as long as you’re comfortable with that, it’s one hell of a show. It’s not trashy, it’s confidently classy and embodies the idea of embracing all sorts of sexuality. The references to cult classics were memorable and highly enjoyable and the music had the crowd pumped for each routine. This is not just another burlesque show. The Suicide Girls Blackheart Burlesque Tour is one of a kind, and a cult classic in its own right. 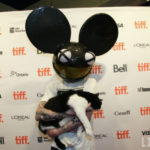