Finland’s legendary orchestral rock band and Jive recording artist, Apocalyptica, are currently premiering the video for their latest single “Not Strong Enough” on AOL Noisecreep. The song which includes vocals by Doug Robb of Hoobastank is the follow-up to the hit single “End of Me,” which featured vocals by Gavin Rossdale. Other guests on their latest album, ‘7th Symphony’, are Lacey from Flyleaf, Gojira’s Joe Duplantier, and Slayer drummer Dave Lombardo. Aside from the vocal tracks, the album features the group’s most dynamic symphonic instrumentals to date.

Apocalyptica’s North American tour will launch March 3rd in Fort Lauderdale, FL at the Culture Room and run through March 27th in Dallas, TX at the House Of Blues. Apocalyptica will be touring in support of, ‘7th Symphony’, which came out August 24th and debuted at No. 31 on the Billboard album chart. Joe Barresi (Tool, Queens of the Stone Age) produced the majority of the record and Howard Benson (My Chemical Romance, Papa Roach) produced an additional two tracks. 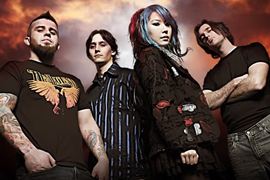