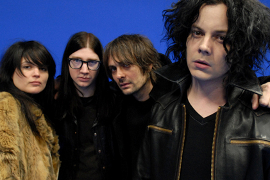 MySpace Music, in conjunction with The Dead Weather are providing music fans with the next level of exclusive album access. Beginning on Monday, May 3rd, the premiere music site will be live-streaming The Dead Weather performing their latest release, ‘Sea of Cowards’, in its entirety. The band will perform the album front-to-back in the live room at the Third Man Records building in downtown Nashville, the same space in which they played their very first show in March 2009. This exclusive live performance will begin streaming at 3 p.m. PST/6 p.m. EST on MySpace Music as well as the band’s MySpace page.

The Dead Weather combines the furious talents of members Alison Mosshart (vocals/guitar), Jack White (vocals/drums), Jack Lawrence (bass/drums) and Dean Fertita (guitar/organ). The follow up to last year’s #6 Billboard debut Horehound, ‘Sea of Cowards’ is a robust and vigorous second act filled with primal, bone-quaking rock rhythms and the same stellar urban blues and throbbing sleaze as its predecessor; but this time The Dead Weather push their sound even further, brilliantly building upon their raw chemistry to create the most vital sounding album you’ll hear all year.

‘Sea Of Cowards’ will be released on Third Man/Warner Bros. Records on May 11th 2010. The first single “Die By The Drop,” is an agitated brain worm of a duet between Mosshart and White; the song previously made its debut on MySpace Music on April 27th and is now available digitally and on vinyl. The track comes with a Floria Sigismondi directed video – available now on iTunes. ‘Sea Of Cowards’ is available for pre-order from www.thedeadweather.com.

Following a stunning Coachella debut the band have a floor shaking run of tour dates scheduled, including performances at the Bonnaroo and Glastonbury Festivals.