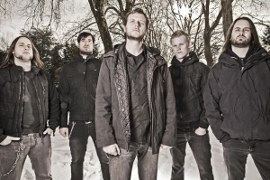 Simon Füellemann, guitarist for the band Arma Gathas, spoke with me recently about the band’s newest record, Dead To This World. It has been a while since a band has hit the scene with such intensity and ferocity. The Hardcore/Metal scene is about to be turned upside down when this hits the stores in April. Dead To This World begs to be cranked loud… really loud. The production is incredibly big and pristine and frankly, in my opinion flawless. Here is what Füellemann had to say about the disc.

The name of the band Arma Gathas is interesting to say the least and sounds as if there is a story behind it. Where did the name come from and what is the story?
Simon: Thanks – that was the intention. An easy, well sounding name that has a meaning beyond other stuff out there. Complexity of Simplicity. Arma means Armor and Gatha(s) are hymns. So together it’s exactly what we were looking for as we are a band that lays heavy weight on the lyrical and conceptual part.

Now that your brand new CD, Dead To This World is complete how do you feel about it? Are you satisfied with the outcome?
Simon: Satisfied – the most I ever did. With all my records before I always new immediately after finishing what I should have changed. What crap people or equipment I used. With this record – I still listen to it after months, look at the layout or read the lyrics, see the concept and feel perfect about it. It is an awesome record. This record finishes a bad period in my life. I put all bad feeling into it and all bad pictures I had in my head. So this is more than a piece of music, it’s a piece of me that I lay to rest.

Every band has its musical influences. What are some of the bands and artists that have greatly influenced you guys and your music?
Simon: Books mostly. I do not listen to music when I write myself. When it comes to a music/artist we appreciate beside that, it’s Henry Rollins, Integrity, Machine Head, Tragedy or Metallica as well as Johnny Cash, Cobalt, Wolves in the Throne Room, Primordial or Karl Orff. Writing a record is sacrificing yourself not copying other bands you adore.

Give us some insight into Dead To This World and the meaning behind its title?
Simon: Aren’t we all? We destroy ourselves and we are unable to defend against nature (luckily). We drive straight to hell, all of us and nobody cares. We are dead already. Eaten up by greed and addiction to the word “more.” Financially and morally, we are all bankrupt. Superficial societies, uneducated human being rulings this world. One man makes a decision, thousands follow. We are dead already.

Give us some insight into the album lyrically. This is a super pissed off sounding record.
Simon: We are dead already. A whole story in 13 chapters about how fucked up I am, you are, the world is and how we do not care. Survival of the fittest – perfect – than at the end there will only be Survivors if any. Look at the financial crises. What did we learn? Nothing. Did you listen to the The Antagonist – US Radio Station in Iraq telling the truth: do we listen? We just look at the damage done after all that. Nothing happens after that. No learning curve, no analysis for the masses. Just watch and get excited for a minute. The world needs a depopulation to survive – Chinese government for example knows, do they act? We are only questioning by telling a story in 13 chapters and giving us the final shot at the end. No hope left anyway. Dead and gone. Who cares?

What is it that normally gives you inspiration when writing lyrics and was there a theme or themes behind the writing of this record?
Simon: You, me, my friends, books, lies, TV, the Simpsons, magazine, newspapers, a smile, a tear, a moment, kids – everyone and everything that is in our world affects us. Everything we feel needs to be told. The theme is “we are dead to this world.” On a musical level, it was telling a story or 13 songs in a fluent way – not the individual songs counts, the whole album is relevant. Same goes for the layout.

What can fans expect when they pick up a copy of Dead To This World?
Simon: An honest, pissed off Punk Metal Record that you have to get into to learn how good it is and why. No MySpace one-song band. A real record like back when art meant something and people still paid for good art instead of stealing.

What is the hardest part about being in a touring metal band and what is the biggest obstacle your band faces?
Simon: No food, nowhere to sleep or sleeping on the spot you played the show two hours before and no money left at the end of a tour. Forget the rock star thing. Ten bands out of 10 million get there. Obstacle? We have none.

How much roadwork do you expect to be doing this 2010?
Simon: As much as we can do with friends. We only play and work with friends or people that we have known for a long time. Keep it real and true.

Are you looking at any particular bands you will be touring with?
Simon: Friends in bands like Heaven Shall Burn, Hail of Bullets, Maroon, Bleeding Through and some others. I would love to tour with Wolves in the Throne Room or Tragedy. May somebody please introduce me?

Any closing words?
Simon: Thank you for still believing and supporting. Stay true to your beliefs.  [ END ]