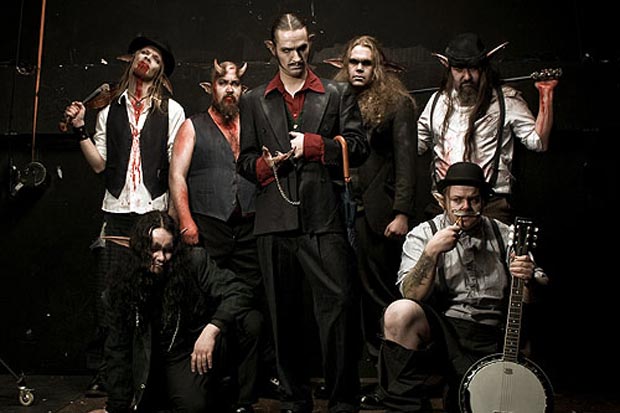 Perhaps the most intense (and some would argue best) metal scene in the world is in Scandinavia. For decades some of the hardest, most ruthless heavy metal bands have come from Sweden and Finland. One of the premier Finnish groups is Finntroll, even though most of their lyrics are in Swedish. Finntroll has been together since 1997 and in that time have developed a pretty devoted league of fans. The group has released six LPs so far, the most recent being Nifelvind released earlier this year. The twelve track album has garnered the best commercial sales results to date in Finntroll’s career. The group is currently making its way through the United States on a tour in support of the new record. We were able to get the opportunity to speak to Fintroll guitarist Samuli “Skrymer” Ponsimaa for a few questions about what the band is currently up to.

Finntroll’s latest record Nifelvind was just released here in North America. Are you happy with how the album has turned out?
Skrymer: We are very pleased with the result! And this time the promotion and sales of the album worked like a charm.

Nifelvind is your sixth studio album now. What would you say is the largest difference between the band’s sound now as opposed to when you first started in the late 1990s?
Skrymer: The effort behind this album is something different than it’s ever been before. Finntroll has always used a bit of shitty sound on their albums, but this time we decided that we would go for the best produced sound possible. We spent for example ages on just checking the guitars.

You have a lot of tour dates booked for both Europe and North America. What’s the most significant difference between European and North American audiences for you?
Skrymer: The people in the audience tend to be a bit more violent in North America! They also sing along more than in Europe.

You recorded Nifelvind at Sonic Pump Studios in Helsinki, Finland. Why did you choose to do the album there?
Skrymer: We recorded the album before over there also and we were very pleased with the result. Nino Laurenne who is working there is a brilliant engineer and nice guy to work with, the choice was obvious. It’s also nice to be in the studio in the city where you live, so you can go home to your own bed after a hard day of recording.

What was the writing process like for Nifelvind? When did you begin work on the album and how long would you say that it took to complete?
Skrymer: The music on the album is mostly written by Trollhorn, like 75%. We gathered at his place a couple of times listened to riffs and everybody gave their opinions about the songs and showed Trollhorn their own riffs and ideas. He made some pre-production versions of them and again we had some listening sessions at his place. We started writing the stuff in April, I think, and the album was finished in September, so that makes it sort of half a year

Of all of the songs on Nifelvind, what would you say is your favourite track and why?
Skrymer: I would have to say that it’s “Fornfamnad.” We had so much fun recording that one and it turned out so wicked and mentally challenging. I also really went out of line with the vocal arrangements on that one!

You have six records out now. Which would you say is the best Finntroll album and why?
Skrymer: I’m maybe a bit biased on this one, but I’m gonna go with the new one. I think it’s the most complete Finntroll album so far. It’s got elements from all our records so far and it’s got this very strange ethnic carnival feel to it.

There is a rumour that Finntroll’s first live DVD is in the works. Is this true? If so, when can we expect to see it come out?
Skrymer: The rumour is true. We are working on a DVD, but no release date has been given so far. We are editing and adding stuff to it still.

What are Finntroll’s touring plans like for the summer and fall of 2010?
Skrymer: There will be a lot of festivals. I think we have booked 13 at the moment and some more will probably pop up. These are concentrated to Europe.  [ END ]