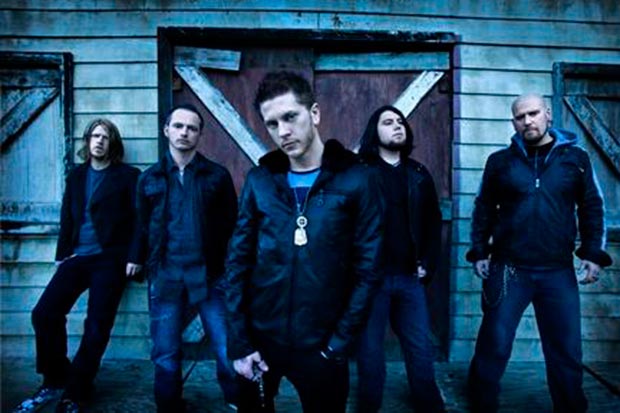 Jason Null, the guitarist for alternative rock act Saving Abel spoke with me about the band’s upcoming release Miss America. Saving Abel is finishing the pre-production of the record and are about to embark on a month long trek in support of Sevendust. The first single, “Stupid Girl (Only In Hollywood)” hit the charts at number 4 and while it is not a complete break from their previous release, it most definitely has a more mature feel to it. Everything we have come to expect from Saving Abel is in here: powerful vocals, great melodies and solid rocking tunes. Once this CD is released in June you can once again expect to hear the band’s music dominating the airwaves.

Hey Jason how are you doing?
Jason: I am doing great.

Where are you at?
Jason: I am in Nashville right now.

Are you on the road at the moment or are you on a break?
Jason: We are in the middle of preproduction and getting ready for our new record right now.

I see that you guys are scheduled to play a bunch of dates with Sevendust next month.
Jason: Yes, I think we have about a month of dates with those guys.

So you are going to take a break from working on the record and hit the road for a little bit of time?
Jason: Exactly.

You mentioned you are working on your new CD, Miss America, how is that going so far?
Jason: We are doing really well. We have seven new songs that we will be playing live now.

What was the writing process like for this CD? Did you guys all write together? How long did it take?
Jason: You know it varies. We all have different ideas and sometimes we have songs that are already complete. But yeah, usually the best way to do it is when we can all get in a room together and sit down and do some writing.

I understand you guys are involved in the USO and have even played over in Iraq for the troops. What was that experience like and what has it meant to you?
Jason: It has been a humbling experience. You really don’t know until you go over there what those guys go through everyday. We are on the road a year at a time but it is nothing like being over there. You cannot just pick up your cell phone and call the wife or call Mom and Dad just to check on them. God Bless them is really all I can say. I mean it is such a different world over there.

From a musical perspective, what can fans expect when they pick up a copy of Miss America.
Jason: I think the best way to put it is t say that we have matured as a band and we have matured as songwriters. The first record was really good and it served us well but I mean in my own personal opinion, this record is much better. There are a lot more rock tunes on there. We still have a few ballads but we just really came into our own. We just molded our sound around our tunes and I think people are going to love it.

Do you think about distinguishing the drum performances and sounds from release to release?
Jason: It just came naturally. After being out on the road for two and a half years you see the crowds respond and you take notice of what they really like and work from there.

How quick are you in the studio? Can you usually knock things out in a couple takes?
Jason: That depends on the songwriting process. If I have a song that I already have written and we decide to record it, we can nail it in three or four days, easy. It is just a matter of getting all the band members into the studio from different towns and different cities. Other songs can take as long as two or three weeks to finish.

Do you decide on a suitable sound quickly, or do you tend to tweak tones obsessively?
Jason: We are really blessed. We have one of the best guitar gurus in the business, Skid Mills, our producer. He is known for his guitar tones and his ability to mix records. Yeah we actually know what kind of sound we want before we start the song. We talk about songs we have heard in the past and what we like about them and how we can incorporate those elements into our tracks. We think a lot about this and there is a lot of work that goes into that.

The first single from the album, “Stupid Girl (Only In Hollywood)”, was released as a digital single on April 8, 2010. What has been the response to this so far?
Jason: I haven’t really seen anything back yet as far as what we are selling but the song was number 4 on the charts even before the release date. I think that song is going to do really well.

What are some of the songs you get the best audience response to?
Jason: Well we played “Stupid Girl” a couple of times live already and we are getting a great response from that. The first three songs of our new set are off of the new record and I think the fans are just ready to hear something new from us. They just go crazy over these songs. Off course they seem to really love “18 Days” and “Addicted” as well.

What has been the most memorable moment of your career so far?
Jason: There have been so many of them but I would have to say the first time we heard “Addicted” being played on a major radio station. That is one of those times I can remember thinking that all of the hard work had really paid off.

How much roadwork do you expect to be doing this 2010?
Jason: We are keeping the books open right now, but we really don’t know at this point.

Any closing words?
Jason: We really just want to thank the fans for buying the records and coming to the shows.  [ END ]