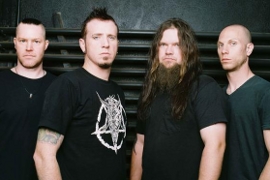 The self-titled release from powerhouse Metal band Mudvayne was released last December. In typical Mudvayne fashion, this time out the band is taking things to a completely new level. The artwork for the CD will be printed entirely in black light-reactive ink, making it only visible under a black light. There will be three different formats; a standard jewel case edition, a deluxe version packaged with a black light and a super deluxe edition that features a larger black light and a special edition black light-reactive poster. Fans of the band will not want to miss this one. I recently spoke by phone with guitarist Greg Tribbett about the new release.

Your brand new Self-titled CD was released last month. Now that it is complete, how do you feel about it? Are you satisfied with the outcome?
Greg: I feel great about it man and I think it is a round up of what Mudvayne is and what Mudvayne sounds like.

Different groups have unique ways of writing their songs. How do you guys go about writing your music? Is it a collective effort or is it more the efforts of one particular member of the band?
Greg: It usually comes from me and then the rest of the band works on it until we get some sort of an arrangement.

You worked with Jeremy Parker, a well-respected producer. How did you get in touch with him and what was it like working with him?
Greg: Jeremy Parker is actually Dave Portman’s engineer and he has been working with us for a couple of records now. So we just asked him to come in and work with us.

What can fans expect when they pick up a copy of the new disc?
Greg: Well first of all the artwork is pretty trippy; it is all black light and it is pretty insane. The cover is all white and you can’t see anything unless you put a black light to it.

So they look pretty cool then?
Greg: Yeah.

When you begin to put an album together are you concerned at all about commercial success?
Greg: No we were not worried about that at all. We just did what we normally do.

How long did the recording process take?
Greg: It took us about six months to actually write it and record it. I am pretty quick it took me a couple of weeks to do my part. Overall, yeah it goes pretty quick.

Do you decide on a suitable sound fairly quickly, or do you tend to tweak tones obsessively?
Greg: We decide fairly quickly and then the sound usually falls where it falls.

What are your touring plans looking like for 2010?
Greg: I don’t know right now. We are kind of concentrating on the new release right now and we will see what happens later on.

You guys have your release party tonight in New York correct? Where is it at?
Greg: Yeah it is tonight at the Last Rites.

That is a tattoo shop correct?
Greg: Yeah.

Are you expecting a good size crowd?
Greg: I don’t know how many people will be there but I am sure it will be packed.  [ END ]