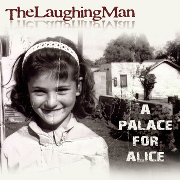 The Laughing Man’s groovy indie tunes are definitely unique and cheery compared to some of the usual metal and punk music which would be found on PureGrainAudio. The band’s debut album, A Palace for Alice, is a really sweet tribute to Micah Lashbrook’s mother boasting thirteen short songs bursting with creativity. It’s the type of music you would find in a coffee shop or café as it is filled with sounds of indie, dub, funk and folk which are blended together to make up The Laughing Man’s cool, laid back debut album.

“Red Lightning Bolt” and “Smile When I Show You the Door” are two songs on the album well worth a listen. They both have some interesting sounds which nicely demonstrate the band’s musical creativity and talent. “Smile When I Show You the Door” is the most unique song on the disc not just because it sounds different from all of the others, but also because it has a lazy Sunday morning type of feel to it. Although these two songs were really good and the album was an enjoyable listen it wasn’t all that great.

Maybe it’s just my ignorance to this type of music which makes me think that almost every song sounds the same. The singer’s voice seems to have two ranges: medium and low. Also, the keyboard is perpetually stuck on auto: doing the same notes on the same setting over and over again. Overall, it was a fairly boring album with a couple of good songs.  [ END ]