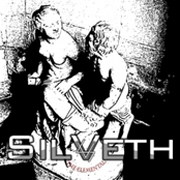 Sil Veth have created a sound sound with an epic scope that offers a a lot of ups and downs. Though the music is also raw it still manages to come across as being ‘thick’ or ‘full’. The music almost carries itself to another level by sounding particularly entrancing, even though the production isn’t really noteworthy by any means. The group sound like a melodic death metal band akin to early At the Gates; although they are also partially classified as black metal. They have a primal feel about them and this lends to a welcoming quality that makes the music accessible and enjoyable on different levels.

Sil Veth craft riffs that are classy enough to be considered at least fairly solid. Again, the music has an epic feel about it which makes the band at least appear very confident in their abilities. At times, like seen part way along the opening track “Star Gazer”, the band slows things down and removes some of the instrumentation effectively creating a sparser sound. The combination of more active and passive sonicscapes makes for a compelling shift in gears throughout. Good yes, though they don’t quite have the dichotomy you’d hear from a band like Opeth.

Sil Veth are an interesting outfit who infuse their own elements with influences from the past; creating a richer sound. They are pretty simplistic in their style, but at the same time are able to make themselves sound transcendental. The Elemental is a great album that although borrows elements from other bands is infused with its own personality. It is a spirited release that has its own unique flavour. Hopefully, this outfit can improve upon their music even further in the future.  [ END ]