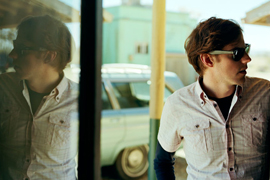 Brief Bio: “My past is my past and a lot of The Glass Passenger is about that,” says Jack’s Mannequin frontman Andrew McMahon, “but it’s also about trying to write myself out of it. This is a record about trying to get out from underneath something. I want people to receive the music for what it is and not have to contextualize it against my own personal battle.” That personal battle is the elephant in the room, so before we get to The Glass Passenger, the long-awaited second album from SoCal’s pop-rock balladeers Jack’s Mannequin, let’s shove the pachyderm out of the way so we can move on, shall we? McMahon could not be happier that The Glass Passenger is finally ready for the fans and everyone who supported him to hear. “The completion of this album and its release represents the closing of a chapter,” he says. “It was a difficult time, but also one of immense hope. It was during this period that my music and my life were the most seamlessly bound together – a truth that makes this album’s release far more pleasing for me than most could ever imagine.”  [ END ]