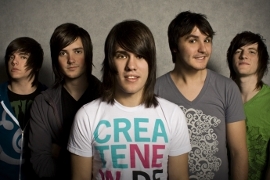 Artist Vs Poet has just launched the new video for their track “Runaway” on AbsolutePunk.net! The video, which debuted on Music Choice last week, was directed by Scott Hansen, and shot in Virginia Beach, VA. It is the first video for the Dallas, TX pop-rock quintet, and is taken from their self-titled EP that was released last year.

Artist Vs Poet has already been featured in MTV’s Real World and Parental Control, as well as being named by Alternative Press as one of their “100 bands you need to know in 2009”. The band has just finished up a tour with Jeffree Star and labelmates Let’s Get It, and is just finishing work on their first full-length album with producers Zack Odem and Kenneth Mount (All Time Low, Mayday Parade, Cartel) at Sound Studios in Atlanta, GA. The album is set for release spring 2010.

Check out the video now at below, and don’t forget Artist Vs Poet’s EP is in stores now!