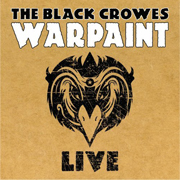 After their initial success between 1990 & 1995, they started to lose some of their mainstream appeal, while hanging on to a large number of hardcore fans. They took a break between 2002 & 2005 but since then have been very much focused on The Black Crowes again, although only releasing one studio album since their reunion.

Warpaint Live is actually the band’s 4th live album and thankfully isn’t just another performance of previous albums played live, but instead a fantastic rendition of the whole of their latest album Warpaint (hence the title “Warpaint Live”!). My first impression on hearing the album was that these guys, definitely, still have it. Even though Chris & Rich Robinson have worked their way through a total of 10 previous members, the Black Crowes are still relevant today and making some glorious sounds, almost 20 years after their formation.

The music I have to admit is a bit samey-samey for my ears, but nevertheless very enjoyable. The sound quality is superb and the quality of music played is no doubt of a high standard. For people who haven’t heard the studio album Warpaint, maybe a DVD would be better for them to get into the music a bit more, but for fans of the studio album this is a must buy. The value for money is great. Two discs, one of the studio album played live and the second one, a collect of covers played live. Can’t beat a good deal!  [ END ]