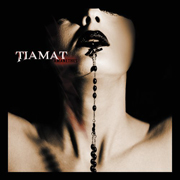 Amanethes has a fairly gothic mood attached to it and is apparent right from the get go. The opening song “The Temple of the Crescent Moon” boasts enough of a ‘mood’ that is causes one to jump up once noticed. Tiamat sort of has a dreariness associated with them, but not to the point of being dragged down or anything as they manage to keep you interested in their morose thoughts. The songs sort of come across as anthems though I wouldn’t consider them anything that you’ll hear played on the radio anytime soon.

Instead, the band craft fairly addictive songs that follow their dreary vibe quite well. Altogether, there’s a distinguished tone that is created by the outfit and they make sure to draw you into the nooks and crannies of their tracks. What’s to be found on this release however, is of a slightly different nature than their very well known A Deeper Kind of Slumber. That album is a bit more ethereal than this one, but they both are relatively straightforward in their approach. Tiamat has a manner of drawing you into the gloomy soundscapes they portray quite effectively, but sometimes the music comes off a little light to fully grasp you the way you would like.

Tiamat sometimes has a certain amount of emotion to pull of its tasks, but doesn’t have a seemingly, completely passionate approach. The album thus cruises by at an enjoyable pace, but doesn’t have the gravity to pull it all in. See “Meliae” for an example of a song that does have some emotional energy attached to it. The overall opinion on Amanethes is that it is a very good album, but lacks that extra bit to carry it into being a very great one. Regardless it’s worthy of a few listens.  [ END ]