Brief Bio: In April 2009, Mike Shinoda revealed on his blog that Linkin Park will be working on the score for Transformers: Revenge of the Fallen with successful film composer Hans Zimmer. On May 7th, it was further confirmed that the song recorded for the film is titled “New Divide,” and was released as a single on May 18th. A clip from the song can be heard 14 seconds into the new trailer. The music video for “New Divide” was released on June 12, 2009 and was directed by Mr. Hahn. On June 22, 2009, the band played a short set after the premiere of Transformers: Revenge of the Fallen. The concert took play on the street in Westwood Village. In May 2009, Linkin Park announced that they were working on their fourth album which will be released in 2010, with the aim for it to be “genre-busting”. The Transformers: Revenge of the Fallen Official Soundtrack features Linkin Park’s new song “New Divide,” and music from Green Day, Taking Back Sunday, The Used, Avenge Sevenfold, and much more.  [ END ] 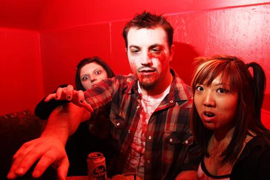