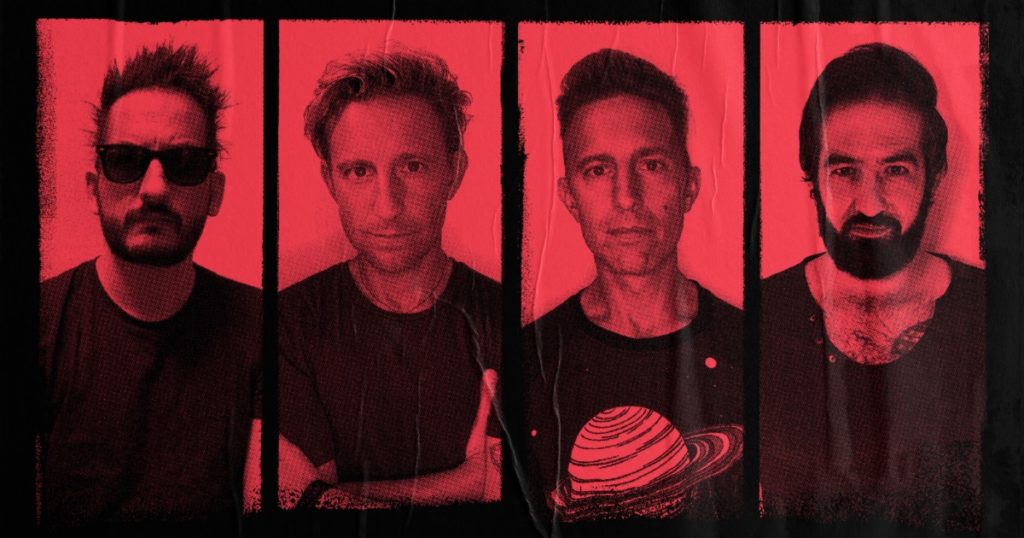 Sonny, Madina Lake and Hollywood Undead, though and odd line-up, still a great show. I didn’t know what to expect going into the show but I also didn’t expect to meet and interview someone with an incredible amount of serotonin flowing through their brain. Nathan Leone, Madina Lake’s lead vocalist, is definitely one of the chillest dudes I’ve ever met… and has an amazing band to back it up. I had the chance to talk with Nathan about his band’s newest album, Attics To Eden, released on May 5th, 2009, among other things, all of which left us busting our guts with laughter.

Do you guys ever play that “Adalia Game” on your website?
Nathan: I haven’t played it. I’ve heard about it, but to be honest, I haven’t even seen it yet.

No? ‘Cause that thing is addicting and I…
Nathan: It is?

Maybe it’s like endorphins from the colours or something but it is addicting.
Nathan: I love that! That’s good to hear!

You should play it man!
Nathan: I’ll keep that in mind man.

I can’t get past the third level but…
Nathan: You know what that’s what I keep reading, like I’ve heard on a message board or something, people always complaining about that third level! Wolves or something?

Wolves yeah!
Nathan: I’m gonna get on it!

You should definitely do that! Anyways, we’re just under two weeks now from the release of the second installment to the tale of Madina Lake.
Nathan: Yeah!

How stoked are you?
Nathan: Unbelievably! I feel like it takes bands, some right away, but sometimes it takes bands a couple records to kind of find their identity. I feel like with Attics we completely found who we were finally. We’re very proud of the first record but you know, some people kind of lumped it in as Emo or Pop-punk, and to each his own but that’s not something we were excited about, it’s not something we listen to and never set out to be a part of that so this one is completely different. It’s a hundred percent who we are and we’re super excited.

Cool, cool, so what does this part of the story entail?
Nathan: Well basically the first one kind of introduced the town and the characters this one expands outwards. So, the first one was set in Madina Lake this one is Madina Lake and its relationship to the rest of the world and it progresses the actual events in the rest of the story and it’s getting pretty interesting. It’s going to be super fun.

Well, even though the story is based in the 50s, correct?
Nathan: Yep!

…in a secluded village you make the simile of a “70s disco” in the song “Let’s Get Outta Here”, you don’t find this weird at all, or what was the point of that, hoping someone would catch it?
Nathan: Well, okay, basically that song, “Let’s Get Outta Here”, is about this escape to a paradise and story wise if it references the 70s you would think of parents from the 50s, the character’s from the 50s’ kids coming up right about at that age, 20, would be at their 70s disco, you know what I’m saying? It’s more of a metaphorical paradise that you can create in your mind. Everyone loves a good disco! [laughs] I think.

Roller disco is my preference!
Nathan: [laughing] Of course!

Most of it is just a metaphor for your message right?
Nathan: Right! I think, you know, a lot of people in the world can get stuck in ruts including me but you know, be it work or school or whatever in your life’s just become, you know, redundant, you know the people around them become so redundant that it’s just eating them alive. I think that the idea of escaping is very prevalent you know a lot of people, I think a lot of people want more, [they] want to shake it up or don’t want to continue their routine every single day, you know, metaphorically speaking if you could imagine this psychological paradise, everything you’ve dreamed of, that’s kind of the sentiment.

Cool, yeah! So you feel its better getting your message across using a story?
Nathan: You know, to be honest, songs usually come first with the story in mind but not so much. We want to stay as true to the songs as possible at first then Matthew actually wraps the story around the songs lyrically so, yeah, so I think, you know, just because we don’t really want, we didn’t set out to be this concept band per se, we just wanted to be a band with songs that we love and also as an opportunity to be as creative as possible. We added the story element, ‘cause like Matthew always says, like when we were kids listening to music, music was an escape for us, you know it was an escape almost to this imaginary world ‘cause once you put on the head phones, or once you go to the show and they close the doors and turn the lights off you’re not in your life, per se, at that point and that’s the beauty of it this escapism. So, that’s what we love most about music and that’s what we set out to do mostly with the band, so…

I can see that, cool. I heard somewhere that the story is supposed to span over 3 albums, that’s what you guys were planning on; do you think you’ll keep writing after the story ends?
Nathan: Uh, yeah, definitely! We, again, we did just like the first story we want to spread over the three records because we had the beginning, we had the end, we left the middle open ‘cause we knew we were going to be on tour for two and a half years and whatever experiences we had we wanted to incorporate into the middle. That’s why we kinda picked three to use for this whatever, this concept, after that, I don’t know. We may start another three record thing we may just do single record ideas, I’m not sure, but we hope and dream to be around for a while so…

Yeah, so it’s all going to be based around the same town, do you think, or are you not to sure yet?
Nathan: I don’t know yet to be honest, I’m not positive. We’re not gonna change band names that’s for sure but… [both laugh] I don’t know if that’d help anybody.

You should definitely put in a story about a 70s disco then. Then that’ll make sense!
Nathan: Doesn’t that sound fun!

Yeah.
Nathan: I will! [both laugh] Then it will all make sense!

Everything comes together! Do you guys know what the next album is going to sound like sort of, [as of] yet?
Nathan: No, to be honest, we didn’t know what this one was gonna sound like at all. We had our, they say you have your whole life to write your first record then a couple months to write the second which I think kind of served us well because, you know, when you don’t have much time to write, you don’t have time to second, third and fourth guess things and we were just going for it. Whatever, if it came out sounding like an industrial, metal song or you know, or pop song or whatever that was fine, we just ran with it. Which is really cool, ‘cause wherever we all were in our personal lives psychologically and everything, that’s just what it was at the time. So we don’t try to plan ahead to much ‘cause we don’t know ever really where we’re gonna be, you know what I mean, at that point where we start writing and so, we’ll see when we get there but so far I like the progression.

Cool! So, you guys made a video for your newest single “Never Take Us Alive” recently, how’d that go?
Nathan: We, okay, it was kind of a battle conceptually. We were really having trouble kind of getting the video to see our vision through but the most important part of it, we thought was in tact, which was the scene like this kind of warped Salvador Dalhi meets Tim Burton set. Kind of a playground with dilapidated swing sets and crooked, you know, whatever you call those wheel things. [laughs] Um, which we thought was badass and that remained in tact. But it took a lot of editing and arguing to kind of salvage that aspect of it. So, we love it and we’re proud of it but we’re excited to do the next one. [laughing]

Nice! You guys gonna pull a Pink Floyd and make a movie out of the story?
Nathan: Wouldn’t that be cool? I’d love that! You know, I think we’re gonna kinda wait to see – what we kinda wanted to do is wait ‘til we get the third record done and get the story done and make it a book and from there maybe, sky’s the limit! If people dig it it’d be amazing!

I’d definitely go to see that!
Nathan: My man! Thank you!

No problem man! Last year at Warped Tour here in Toronto, myself among many others stood in the pouring rain, got drenched beyond belief just to watch you play.
Nathan: I cannot thank you enough! [both laugh]

What can you attribute having people be able to stay, getting wet, to [listen to] your music?
Nathan: Man, first of all, thank you! That means the world to us! Secondly, I feel like, I don’t know, a handful of bands, a lot of bands, whatever! Some bands picture like a separation between the audience and themselves and they’re up on this like [motions with his hands] kind of pedestal, the audience is down here, they come out from backstage, play then go, you know? For us, it doesn’t make any sense whatsoever! For us it’s like everybody in the audience and the band is sharing the energy, kind of one experience and I think that’s been a good way of connecting with people because we’re no different from them, the barrier means nothing, you know what I mean? So we’ve gotten a lot of like really devoted supporters through that because we respect and love them, just as much as they appreciate our band so you know, maybe that’s why people will stay in the rain and check it out. We’re so grateful for that by the way.

Yeah, nice! ‘Cause I remember you jumping in there and then like everyone was soaking wet like…
Nathan: [laughing] It was awesome! Matthew ate shit on that show, he like went down and slipped on some cables and water or something?

[laughing] Oh yeah!
Nathan: [both laughing] It was amazing! I’ve never seen something so…

I bet a bunch of girls just get wet anyways at the show.
Nathan: [laughing] Yes sir!

Cool well we have a fan question. Kyle Ryan from Aurora, Ontario wants to know what the most ridiculous thing you’ve ever autographed is.
Nathan: Um, prosthetic leg.

Really?
Nathan: We were in Virginia and [laughing] it was the weirdest thing ‘cause you know when you’re in a line or something it goes from posters to CDs to someone’s wallet to their jeans, stomach, t-shirt, and then as the line’s going one person lifts their leg up like this and I went down to sign it and as she fuckin’ took it off. [both laughing] It scared the shit out of me! But yeah, that was probably the most ridiculous one so far!