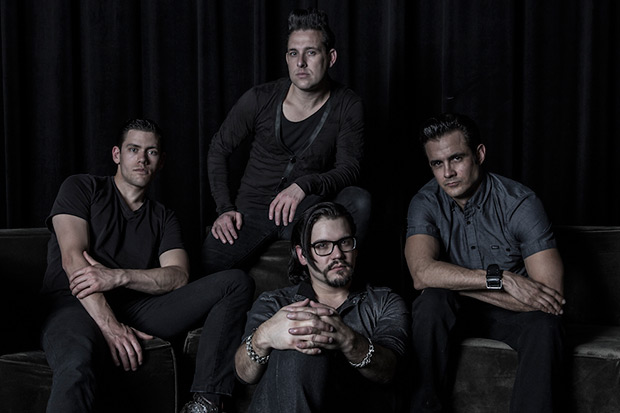 Interviewing recently signed bands is always awkward for me, no idea why, it’s just hard to research and find something deep to converse about and the lack of previous recordings available to compare with current albums I guess. Maybe it’s just hard to relate to someone from the opposite side of the continent in an entirely different music scene. Who knows? In any case I got to sit down and talk to Kris Dommin fromtman of Roadrunner Records newly signed Dommin about touring, getting signed and the making of their video for “My Heart, Your Hands”.

Alright, so what’s it like for an American band playing Canadian Music Week?
Kris: Well, I mean this is the first time we’re doing it and I’ll probably let you know that after it’s all done. But, I mean, at this point we’ve only been here a few hours and it hasn’t been an experience yet because we haven’t really done anything yet, but so far everyone’s been really nice and cool and everyone seems really down for the music so…

You don’t feel out of place at all?
Kris: No not at all.

So what’s LA like compared to Toronto?
Kris: It’s warmer.

What do you think the major differences between the [LA and Toronto] music scenes are gonna be?
Kris: Um, you know, I don’t really know much about Toronto’s music scene. I mean, I know that LA is really diverse because there’s so much happening there across the board so I mean, I’m not sure, I still need to discover what Toronto is like as a scene, you know, as far as rock or whatever if there’s kind of one thing happening here or not but I can only speak for LA, it’s really diverse across the board.

How do you guys stand out with your live set?
Kris: I think you know, at this point what I’ve noticed for us what stands out is the style of music that we’re playing. I don’t know a lot of people doing it. And usually when we play shows we’re playing with all kinds of bands, people really seem to gravitate towards the fact that we’re doing like this kinda rock ‘n’ roll style, not necessarily metal at all. It’s just rock ‘n’ roll but, you know, it’s got some real kind of hippie overtones with the keyboards and vocals and stuff. The sound is what makes it stick out.

For sure man, you guys do have a pretty unique sound, I would agree with that. Now to your music itself, I couldn’t find anything about an album; do you have one in the works?
Kris: We’re putting an album out on Roadrunner, and I think it’s coming out in May. It was originally slated for May 12th, I don’t know if it’s gonna get pushed back at all but it should be in and around May.

Being one of the newer bands on Roadrunner, how did you guys get noticed by the label?
Kris: It was really, I mean, a combination of building our MySpace presence and playing out a lot and when we put out an independent album that was produced by Dirty Icon Productions, and one of the producers in that group is Logan Mader, who has a relationship with Roadrunner from previous bands he was in. So he’s the one, I think, who got them initially, you know, got their initial attention.

After this tour you guys don’t really have anything planned, according to your MySpace again. Well, do you have anything planned?
Kris: Oh yeah! Well, we’re off for like three weeks I think and in that time we’re gonna be, we just shot our video for “My Heart, Your Hands” with Dean Karr who’s an amazing director, so we’ll be looking at the edits of that when we come back to home then, I think, the second week of April we go out on tour again. So we’re gonna be out with The Birthday Massacre and I Am Ghost and that’ll run through the middle of May. Then we’re gonna be on Warped tour in the summer, at least a few weeks of it. So, I mean, there’s gonna be stuff happening non-stop throughout the rest of the year, yeah.

Cool, now the video, it’s already posted. That’s not the final cut?
Kris: The video that’s up there now is a video that we did ourselves and it was directed by our keyboard player, Konstantine. That was something that we did back in 2006 and since the “My Heart, Your Hands” song is gonna be our main song that they’re gonna push at first they wanted to reshoot the video, you know, obviously more professional then what we had the means to do. So we got hooked up with this guy, Dean Karr, who’s done everything from Queens of the Stone Age to Velvet Revolver to Marilyn Manson, you know, and he shot an amazing video. So, you know, we’re hoping to look at all the first rough edits when we get back into town.

Can you give us any teasers?
Kris: Um, I haven’t seen what’s gonna be edited in or out yet but it’s definitely, it’s shot in this slaughter house, an old slaughter house so its got these, you know, grimy walls and it’s a really cool location.

Is there any like, interesting stories from the set or…
Kris: You know, its happened so fast, it was just last week so I haven’t really had time to take it all in and stuff but you know, I was blown away by the director and his entire crew they were just so professional and it was just amazing to work with them, kind of, “A” game people.

Do you have anything you like to add or say to your future and/or present fans before we go?
Kris: I would just like to say that I’m looking forward to going out there and meeting everybody. We’ve worked a long time on the internet and made a lot of connections to, you know, people around the word and just the fact that we’re actually gonna have the chance to go out there and meet them in person and connect with them on a face-to-face basis is really exciting for me so. I just can’t wait to shake hands and meet everybody.