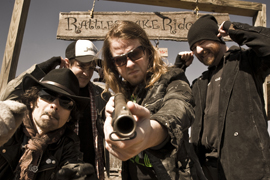 Brief Bio: What happens when four exceedingly different and distinct personalities come together to create heated, inspired music? Well, as CKY have shown over their ten plus years as a rock and roll force, it can lead to intelligent, provoking riffs and lyrics, meticulously detailed production combined with magical multi-textured melodies and heady drumming. But, “it also creates tension, tension that must be let off,” says the band’s singer/guitarist, Deron Miller. Not too long ago, ten years of tension caught up with the West Chester, Pennsylvania outfit. Producer/guitarist Chad I Ginsburg says the band “ended up physically beating each other up at once on their tour bus,” CKY decided to take an extended timeout. “We needed a break, more than just the kind of break you think,” explained Miller. A break leaving drummer Jess Margera and bassist Matt Deis wondering what future, if any, there would be for CKY.” The band were halfway through the writing of their forthcoming album, Carver City (which was recorded and produced by Ginsburg at his new Studio CIG in Pennsylvania), CKY found itself unable to resolve internal issues, resulting in the band being put on the backburner. For an entire year, Ginsburg and Miller did not speak, nor did Miller and Margera. This extremely uncomfortable time away from the thing they loved most would allow the band to overcome the many lingering obstacles standing in the way of their greatest effort to date, Carver City, which hits stores May 19.  [ END ]

Prizing:
TWO (2) wacky winners will each win a FREE copy of CKY’s SICK new disc Carver City and a fuCKYou t-shirt. Come an get it ya’ll!