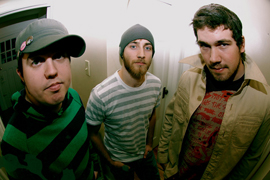 Assemble Me: “Assembling An Arsenal Of Awesome”

Work. Tour. Work. Tour. It’s a routine that Assemble Me have gotten used to since they started up in 2007. Currently living out the “tour” part of this pattern, they’re out promoting their new release Atelophobia, an album which guitarist and vocalist Dan Thomson calls their “greatest group effort yet”, paying special attention to the word “group.”

The process that went into creating Atelophobia was of a different dynamic than that of their first release Sharks.Human.Danger. Songs the first time around were written between Thomson and the band’s bassist and vocalist Cam Zwicker before even having met their current drummer, Jeremy Foley. “This time it felt like we were doing something real,” Thomson said about Atelophobia. While songs for the first EP were developed in just over a year, with the new record the boys took eight months to write the songs, this time with everyone’s input. With each member’s style mixed into one, it’s a real reflection of the whole band, he said.

While musically the boys always try to stick it together, Assemble Me have a separate process for their lyrics that’s different from most other bands they know. “Me and Cam write what we sing,” told Thomson, “so we have songs where the subject matter is completely different between verses and the chorus.” So if he were asked what it is that Zwicker’s signing about, he said he wouldn’t know and vice versa. As for Foley, apparently he does what he’s good at behind the kit and sings along terribly. “Really, the dude can’t sing,” laughed Thomson.

But after burning out from months of writing and spending a week recording Atelophobia at Sundown Records in Guelph, Ontario, the band was ready to put away their pens and paper and start on the road again doing exactly what they’ve been aiming to do… tour. “You can’t really develop as a band if you just sit around at home,” said Thomson, “and there’s something really pleasant about being in a new city every day.”

And with the great reviews that the new release has been getting so far, it seems as though these guys will be welcome at every city that they hit. “No one’s come up to us and told us, ‘it’s just OK.’ It’s been more, ‘I can’t stop listening to it.’” Even when the Algonquin College radio station in Ottawa aired a feature on Assemble Me just before the release of the new album for their show Sounds of the 613, it became the second most downloaded feature only falling behind that of Toronto hardcore band, Cancer Bats.

With all three members officially accounted for and positive recognition coming in from all over Canada, the future isn’t looking too bad for this band hailing from the country’s capital. And with a good friend along to document all the good times, the mishaps, and of course all the shows, you know these guys aren’t playing around. The band has 11 tapes of raw video footage that they like to think will eventually be released one day. “Something will pop up on YouTube. Maybe. Once someone has the energy to sit down and do it,” laughed Thomson.  [ END ]