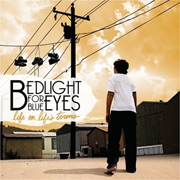 Since this album has been released, sadly the band has claimed they are on an indefinite hiatus in 2008. Earlier this year the band played their last show, fittingly at the School of Rock in Hackensack New Jersey… I say fitting as they are from Jersey. Band or not, I sincerely hope vocalist Danny Rinaldi carries on, his voice is highly infectious.

I think I have a knack of knowing which bands will appeal to me, and I totally dig this album. Would I have bought it? Probably not, but I would have streamed it all kinds. And I have to mention, when a lead singer is replaced usually a whole band changes; the music may sound similar but vocalists are what bands are known for. I think vocalist Danny Rinaldi does a good job of both keeping old fans and attracting new ones.

On Life On Life’s Terms, each track bursts through your speakers, grabs you and holds you tight till you listen to the whole album again and again. “Ms. Shapes” has that Jason Mraz-type lyrical style and play, but Bedlight For Blue Eyes did what they do best, gave it some flare and created an awesome pop song. “Whole Again” is so catchy, it’s actually mind boggling why this isn’t on the radio; at least instead of the same “super-stars” we hear over and over again.

There’s this whole thing called “pop punk”, a genre that sometimes gets a bad rap. Bands like Bedlight For Blue Eyes are groups that shouldn’t be punished for simply being placed under the genre.

What can I say; the album is an easy listen. The album carries you through melodic pop sounds and towards the end, just the right amount of jolt with “Without You (we are everything)”, which includes the sickest 80’s type riff. From the right hooks, to matching riffs, to incredible vocals that sometimes channel your inner 80’s rock star, this album has the right recipe for a smashing slew of songs.  [ END ]