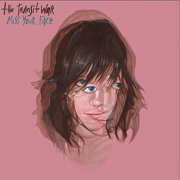 Looks like I’m a little late to the game with The Transit War, considering Miss Your Face dropped over two years ago. Still, I can certainly aspire to say something that hasn’t already been said.

The San Diego quartet offer up a mixed bag with this release, swaying from glimpses of terrific songwriting to bland and uninspired passages on a regular basis. The offering’s second track, for example, is one of the album’s highlights, showcasing a big and memorable chorus that sounds ready for radio. The band takes a slightly busier and more aggressive tone than we’ll find throughout the majority of the record, and it really pays off; however, small pest-like parts such as the harmonies in the songs bridge fall flat and keep it from achieving perfection. The more angst-ridden formula is revisited for “Hey! Is For Horses” and again finds The Transit War doing a good job of presenting upbeat power pop with hooks able to support the weight of the thicker choruses.

There are other instances on the album that show promise, such as the bridge to “Chutes and Lasers,” which employs an oddly-timed groove with a locked-in guitar/bass/drum pattern over which a shimmering guitar lead can draw in the listener effortlessly. Similarly, the bridge of “Sheep In Your Head” has some cool gang vocals and the song’s main riff is accented by another effective guitar lead.

Still, while the band certainly gets it right often enough to make the album worth a listen, there are a lot of elements that’ll hinder its success. Overall, the vocals – particularly the harmonies – fall flat, for some reason or another never matching the quality and precision of the music. The middle of the record serves up some sequential snoozers like “Only Evidence” or “Lupus,” neither of which hold anything of value.

For what I can only assume is a young band, The Transit War certainly shows some promise. Like I said, I’ll likely revisit a few of these tracks – specifically those where the band is a bit more urgent in their delivery. Far from perfect, Miss Your Face still caries some noteworthy examples of straightforward rock music with an indie pop tinge – not too bad (for the most part).  [ END ]