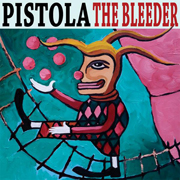 A press clipping from Chart Attack attests that The Bleeder, the latest full length from New York’s Pistola, showcases “a band that is unique and has a fantastic singer.” I spent more time than I should’ve researching to see if it was referencing a different album than the one I’d just force-fed myself, because what I found in The Bleeder is a bastard child of a Jefferson Airplane cover band and Chevelle – and one I’m guessing neither party wants to claim. It’s “unique” alright – in the way your doctor uses the word to describe a rash.

If there’s someone in the group that knows something about crafting a listenable track, he or she is certainly keeping a low profile. These 12 tracks sound like they were written by a group of tenth grade music class dropouts who’ve been listening to a bit too much nu metal. Still, one might be forced to ignore this shortcoming as it’s buried under a totally unguided, grating, downright dismal female vocal performance.

The first two tracks are painfully amateur, both in composition and presentation. The repetition of “I’m doing what I want” over and over in “Be Patient” is about as pleasant as cutting gum out of your pubic hair, while the vocal phrasing in “Tragedy Is A Beauty Queen” makes absolutely no musical sense; it’s like the all-too-common occurrence of an iTunes track being bombarded by a song from an automatic player on your browser, and trying to deal with the onslaught of two separate melodies – only they’re both horrible. I actually found myself hoping the singer would go back to droning on note-for-note with the guitar melody as she does for the majority of the record.

After awhile, I asked if maybe adding in a harmony would be too ambitious, until realizing that the last thing we need is two wailing, off-key voices – the musical equivalent of Mrs. Hitler having twins. I don’t think listening to music has ever felt laborious, but there’s a first for everything. Congratulations, Pistola – you’ve made silence a hot commodity.

Immaturely negative music reviews certainly aren’t my longsuit (at least anymore), but I have to pump out at least 250 words here, so “no good” wouldn’t cut it. By the time “We’re Alright, Pt. 2” came around to close up the record (an instrumental track, thank God), I was about ready to push a “pistola” against the back of my throat.  [ END ]