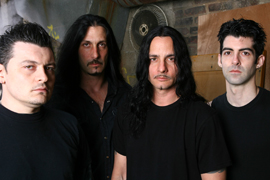 Brief Bio: The groups debut album – HEAVEN IS GONE is a slow grind, a thick blackened brew of organic instrumentation matched with rich bellowing vocals; bringing to mind classic recordings such as- Soundgarden’s Louder Than Love and Black Sabbath – Black Sabbath. Chugging along like a steam locomotive, Kelly and Hell plant the roots of the rhythm as Hickey and Brown fill in the landscape with broad strokes of roaring guitars. Kelly explains “We put a lot of time in trying to find ourselves, since we started working on SEVENTH VOID material in 2003. We finally found our identity when the song ‘Heaven Is Gone’ was written. It has all the elements of what we wanted Seventh Void to be.” The album, overall is “a story of the life of a tormented person,” explains Brown. “If you read into the lyrics, it has a real storybook quality to it.” When the record was done, the group set about finding a champion… someone who would work with them to get HEAVEN IS GONE to fans of rock music everywhere. SEVENTH VOID’s true-believer came in the form of Vinnie Paul (HELLYEAH, DAMAGEPLAN, PANTERA) who signed the band to his label, Big Vin Records. Vinnie loved the record so much he co-produced and mixed the album with long time cohort Sterling Winfield . His passionate support is greatly appreciated by all. “When Vinnie Paul calls you at 5 am to tell you that he just played the record for his friends and everyone loves it (like he knew they would), you are ok with waking up at that hour,” laughs Hickey.  [ END ]

Prizing:
ONE (1) lucky music lover will win a signed copy of Seventh Void’s new record, Heaven Is Gone and a poster.