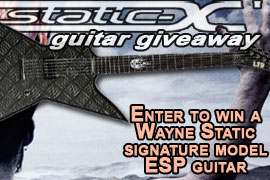 Brief Bio: Static-X are returning with their heaviest, most flammable work to date. Cult of Static, on Reprise Records, marries the band’s aggressive driving force with disarming experimentation. The fiery raw quality of Cult of Static is blatant as the first single “Stingwray” which the band posted on their MySpace this week. “Stingwray” was inspired by Wayne Static’s wife Tera Wray Static and the Corvette Stingray she drives. The song’s powerful beats and heavy guitar riffs make this song a commanding force on the record. A song you may already be familiar with is “Lunatic” as it was included on the Punisher: War Zone movie soundtrack. Although “Lunatic” is relentless and raw, brandishing a ripping groove and an impenetrable barrier of guitars the album cut was re-recorded to feature a solo by legendary Megadeth frontman Dave Mustaine. “I’ve been a huge Megadeth fan for years,” explains Static. “We’ve toured with them twice. Mustaine and I really hit it off on the road. His lead style is one of the most distinctive styles out there. There’s something amazing about it. When you hear him solo, you know it’s him.” Cult of Static hits stores on March 17th on Warner Bros Records.  [ END ]

Prizing:
To help celebrate their new release and current tour, Static-X and PureGrainAudio are giving one fan a chance to win a special Wayne Static signature model ESP guitar. How sick is that?