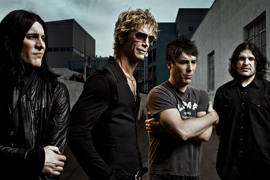 Brief Bio: The band released albums in 1999 and 2001, namely Live Episode and Dark Days, before other commitments meant that DUFF MCKAGAN’s LOADED were put on the back burner to some extent, although they never split up. “No way! We’ve been playing Xmas charity shows in Seattle on an annual basis over the last few years,” says McKagan. “These have been growing in popularity as well. Then last Xmas, we started to talk seriously about doing a record, which is what has led us to this place. I’d write something and store it away for future use, so the idea of doing a new album has always been in my mind.” The process of working on the new record, which will be called Sick, has excited Duff beyond expectations. “We all knew it would be fun to go into the studio (Jupiter in Seattle) and do a new album, but it’s actually been so inspirational. This isn’t a stellar Pink Floyd kinda effort. But it perfectly represents what we do so well.”.  [ END ]

Prizing:
ONE (1) lucky music lover will win a sick Duff McKagan’s Loaded T-shirt and a free copy of the new album “SICK”.