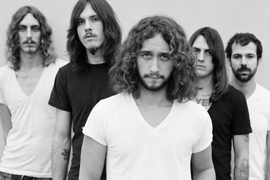 I don’t shop at American Apparel nor do I hang out in trendy bars such as Tattoo Rock Parlor, however, when The Parlor Mob came to town I made an exception on the latter. I sat down with bassist Nick Vallapiano and guitarist Paul Ritchie of the Mob and conversed about symbolism in their latest release, mob dealings and their back-to-back nights at the Tattoo Rock Parlour.

So to start off, what kind of a mob hangs out in a parlour?
Nick: Oh wow! One that enjoys constant ass-kickings and bad-ass thrashings of all kinds.

[everyone laughs] So not an ice cream parlour?
Nick: No!

Paul: Well we do spend some time in ice cream parlours.

That’s true indeed, but your band was named after the original Parlor Mob, right?
Paul: Yes.

Do you guys share any similarities with this mob?
Nick: I mean, we’re a band of brothers who, you know, stays together to kind of rip people’s ears out you know? [Paul laughs] I think that’s kind of on the same lines.

Nice! Okay so you guys are playing Tattoo Rock Parlour tonight, was this done on purpose?
Paul: No, actually it wasn’t, this is our first gig in Toronto, not last night but the first time we ever played here was for the Mayhem party, for the Mayhem Festival, and we were invited to be the entertainment that evening so we just kind of, it’s a funny coincidence.

Nick: Yeah! So they invited us back and we’re happy to be here.

Awesome! So why two nights?
Paul: I don’t know that’s a good question.

Nick: That is a good question, we were wondering that ourselves. I guess so that, you know, so that people had two opportunities to come out and see us since we don’t get to hit up Toronto everyday, you know?

It’s also right in the middle of the week so…
Both: Yeah.

Paul: I think Thursday night is gonna be a better night. I mean, last night was great!

Well your album And You Were a Crow dropped this past May, can you give us a little insight into the symbolism of the crow throughout your album?
Nick: The crow, I mean, it’s kind of like anything. Our singer, Mark, does all the lyrics and he’s just kind of stuck on the crow thing. It’s really just, you know, a… it can kind of… it can really apply to anything, it’s like symbolism for kind of negative things, thorns in your side kind of.

Paul: I’d say so, it’s just a reoccurring symbol, I mean, it’s a metaphor that’s used differently throughout each song and person. I have my own personal opinions on what it means and I think each person in the band does and I think what’s beautiful about it is the fact that anybody can, you know, use it as a metaphor and…

Nick: You can really draw your own conclusions.

Cool, cool. So have you guys been writing at all since its release?
Paul: A little bit here and there, we’re gonna have some time coming up when we’re gonna get to do some substantial writing. I know we all have individually on our own but this spring we’ll be on it we’re gonna try and finish up a lot of our ideas and I hope to be recording another album next fall. We’ll see what happens, you know?

So has the writing process changed for you guys from the last album?
Paul: No I just think we’re going to grow and mature and see how our sound is going to develop. I’m actually really excited about it but you know I think we’re just planning on playing a lot of festivals and shows of that sort this summer so it looks like we’ll have some time off in the summer as well and I’m looking forward to getting together with the guys and hit the rehearsal space. It’s kind of hard to write on the road but we do it but it’s just we can’t, we don’t ever have time to rehearse we’re just playing shows every night, you know what I mean?

Nick: We’re kind of just writing on the fly in our songs right now, whereas once we get the time to really sit down and patch things out we’re going to be able to, you know, solidify our ideas and really get the next tunes cooking.

So your sound really isn’t all that common these days. What do you feel makes you stand out as a band the most?
Nick: I think the fact that we are a live band that can play their instruments and takes pride in playing their instruments kind of. It makes us stand out a little bit, you know every time you come to our shows, you know we play different show, the solos are different, we’ll have different grooves in there and I think that kind of aspect… we’re not the cookie cutter, ProTools kind of tracks kind of band, you know?

No AutoMaster? [both laugh]
Paul: There’s no bells and whistles man, it’s just a no bullshit show. We show up and just play like we’re not gonna… I’m not gonna change into my costume. I’m already wearing my everyday clothes, just kinda show up and play rock ‘n’ roll, I mean, try and keep it simple, rock out. Let the music speak for itself, you know?

So what can I expect from your live set?
Paul: A lot of energy.

Nick: Things that aren’t on the album.

Oh yeah? Is it the stuff you’ve been writing for the next one?
Paul: We have some new songs that we’re playing, then just a lot of jams probably.

Nick: Yeah and you know, intros and outros and just different twists on the ones we already play.

Alright, cool. So since you guys played two sets in a row, is it different from last night?
Paul: Oh, we’ll see. I’m sure it’s going to be.

Nick: Well, I mean, every night is different from the night before, just based on the way that we play already but we’re going to try and make it a clear-cut different set from last night’s set for sure.

So what else does the future hold other then this new album coming out?
Nick: Who knows man, hopefully a lot of touring, you know, doing some festivals this summer. We’re going to be headed overseas in a couple weeks, which is really cool. You know, in the UK and Germany and Scotland which is mind-blowing for us, we’ve never been over there as individuals except for our drummer, so to go over there and work is really a blessing. I think, you know, just kinda more of the same, us trying to keep on writing songs and keep on playing shows.

Paul: Building up our fan base and, you know, giving more people the opportunity to enjoy our music which we, you know, it’s what we love to do is play so, you know, just try to get a more diverse fan base and become more successful in all of our ventures.

Cool, do you have anything you like to add to your future fans or current ones?
Nick: Oh, well, we might be coming out with a new vodka! [laughs] That was in the works. Yeah, you know, we’re trying to up our entrepreneurship a little bit, maybe a sneaker!

[Interviewer laughs while the other two boast sarcastic smiles]

Paul: It’s been in the works for a while.

[still chuckling] Well I look forward to it all guys!
Paul: Thanks.  [ END ]