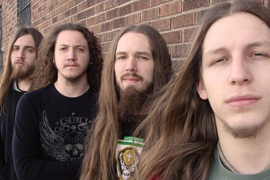 The Onslaught is the debut release from the Wisconsin based thrash band LaZarus A.D. and it is a fast and furious and all out work of Thrash Metal genius. This is a damn good record that will have you snapping you neck with reckless abandon in no time at all. Taking their influence from early thrash metal pioneers the guys in LaZarus A.D. have re-invigorated the genre by breathing fresh air into a scene has within the last year begun making a strong comeback. Frontman and bassist Jeff Paulick spoke with me about the band and their music.

The name of the band LaZarus A.D. is interesting to say the least and sounds as if there is a story behind it. Where did the name come from and what is the story?
Jeff: The name Lazarus comes from the bible. Lazarus was a man who was friends with Jesus whom Jesus raised from the dead. I think the reason we chose the name was because when we started this band we were trying to resurrect something that had not been done for a long time. We wanted to start a metal band that could be great by incorporating all the styles of the past and present into one big badass metal machine. As far as the A.D. goes that was added to avoid any confusion with other bands of the same name. We also have many different uses for the A.D. depending on our mood (“After Death,” “Almost Drunk” and “Alcohol and Drugs”).

Your brand new CD titled The Onslaught was released on March 3rd, 2009. Now that it is complete, how do you feel about it? Are you satisfied with the outcome?
Jeff: We all are very happy with the way the album turned out. From the song diversity, to the production quality, to the layout and graphics we are all very happy with it. However, as a musician there are always things that you want to change no matter what because your ears are constantly changing. You hear things you could not hear before because as you grow as a musician your ear becomes sharper as well. You are able to pick out more things (usually the little things that do not make much difference anyhow). In general though I love this record and am extremely proud of it. I cannot wait to get out and tour in support of this record and let the world hear and see what LaZarus A.D. is all about.

What is your view on the current state of Thrash Metal? How do you identify with the rest of the underground scene?
Jeff: Honestly, I really do not like what is going on in the state of thrash metal right now. I think way too many bands are trying to be bands that have already existed. There are a lot of bands with great talent but their music does not excite me. I have heard and seen countless bands who are part of this “new wave of thrash” and all I can say is if anything, most of these guys are a new wave of old thrash. I mean I love all the old shit too of course but when it comes to being modern in my opinion, you gotta have a modern style. I don’t think the genre will ever survive if everyone is trying to sound and look like they are from Bay Area California in 1985.

You guys opened for the legendary Testament last year. How did that come about and what was it like sharing the stage with such an important band?
Jeff: Well, what happened was Testament were playing in Milwaukee, Wisconsin at a venue called The Rave. They needed openers and we were one of the bands selected. We had played the Rave several times before with many bands the most notable of which was Anthrax. All of these shows had an excellent response leading us to be selected to rock the house with one of our favorite bands of all time. As far as what it was like sharing the stage with them I can answer that simply: BADASS!

Were the Testament fans receptive?
Jeff: Testament’s fans were extremely receptive to us. When we play smaller shows are performance is very chaotic, but when we play a large venue like that, we just explode. We play like it is our last day on earth and at that show we killed it.

What was the writing process like for The Onslaught? Did you guys all write together? How long did it take?
Jeff: The writing process for The Onslaught was long and at times, tedious. I mean we began writing songs for this album when I was a senior in high school and now I am 21. When we wrote these songs, we wanted them to be exactly how we wanted them. We were constantly changing riffs and coming up with new creative ideas to keep the listener and ourselves entertained for the duration of the record.

Along those same lines, how do you feel your live shows differ from your CDs?
Jeff: On disc, we are a heavy, fast, precise, thrash band. Live we are a mosh pit inducing a fire-breathing beast. We take extreme pride in the way that we perform and interact with our fans live. Everyone in this band has a lot of favorite bands but to become a favorite you have to be great on record and even greater live. The way we perform live shows stems from that mentality.

What can fans expect when they pick up a copy of The Onslaught?
Jeff: They can expect a true metal record. A record with elements of past and present and a little something else. They can expect tasteful shredding guitar solos as well as blazing drumming, ferocious vocals, and heavy as hell grooves. They can expect a record that is worth buying.

Tell me about a book or two that you have read that you think other people should read?
Jeff: I think that anyone who is going to be playing rock and roll should read “The Dirt” (the Motley Crue biography) it kicks ass and is hilarious.  [ END ]