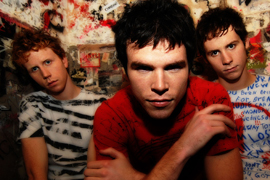 Inward Eye is a raucous, trashy power punk trio whose debut EP is reminiscent of The Clash, Green Day and even Ray Davies and the Kinks. The whole EP has the feel of the mid to late eighties punk scene when the Clash ruled the airwaves. The band is busy finishing up a Canadian tour then heading out on the Vans Warped Tour this summer. I was able to catch up with vocalist and bass player Dave Erickson on a break to discuss the band for PureGrainAudio.

The four song EP is chock full of gang vocals, catchy choruses and lots of gritty down and dirty guitar playing. Every band has its musical influences. What are some of the other bands and artists that have greatly influenced you guys and your music?
Dave: We are influenced by everything that we hear, from all genres. We are drawn to anything that is authentic. Bands like the Who and the Clash especially.

If you could jam with any famous musician, dead or alive, from any century, who would it be and why?
Dave: Billy Preston, cause he’d make it so much fun!

The name of the band Inward Eye is interesting to say the least and sounds as if there is a story behind it. Where did the name come from and what is the story?
Dave: The name comes from an early song of the same name. In hind sight it’s kind of a shitty hippie sounding name for a band like ours.

What is your musical background?
Dave: Self taught for the most part.

What is the toughest lesson you ever learned in the studio and on the stage?
Dave: On stage, hearing loss is permanent, in the studio, technology can be the enemy.

When can we expect more music from Inward Eye?
Dave: Hopefully be releasing a full length late summer.

Do you get nervous before a performance or a competition?
Dave: No, playing live is the best part!

What is next for Inward Eye?
Dave: We’ll be finishing up a Canadian tour with Mobile, playing South by Southwest and playing most of the warped tour, so a lot of shows, beer and driving, gotta love it!  [ END ]