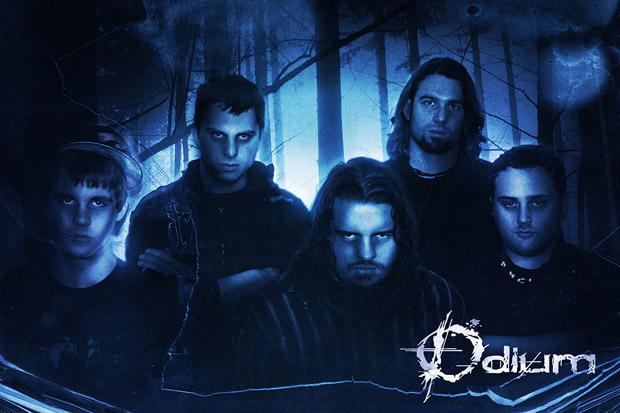 Meet Joe. Joe is from the small farming community of Walkerton, ON and plays in a metal band called Odium. They’re good. They take some driving Swedish metal influence, shake it in with some punishing breakdowns reminiscent of early Killswitch Engage material, and employ a vocalist that outputs equal parts Phil Labonte, Maynard, and Randy Blythe (with his own personal tinge that’ll be used to describe others, someday). What they achieve is a collage of aggressive tendencies that has enough variety to appeal to a wide range of metal fans. The band’s debut full length, At The Bottom has just dropped on Year of the Sun Records and they recently filmed their first music video with director Chad Archibald (Arise & Ruin, Farewell to Freeway). Joe and his band work hard. They’ve got the chops to continue creating boundary-defying heavy music and the smarts to make a real go at cracking into the scene. I, for one, am anxious to see where their music takes them. You, on the other hand, can say you first heard of them right here.

Odium is from a small town, with no major live market for at least an hour and a half in any which direction. Do you think your “rural underpinnings” hindered or benefited your music making in any way?
Joe: I don’t know – it’s hard to say. I think it offers a bit of a benefit. We don’t have a lot of distractions, but… That’s a hard one to answer. If we were to do this in Toronto… I don’t think it matters where you are – just how you do it. For me personally, though, I wouldn’t want to be anywhere else but here. I’m happy here, and it’s where I want to be to do what I do. Nowadays, it doesn’t really matter if you’re in a small town because everybody’s connected. I mean it’s a drive to any show, but you’d be driving no matter where you were. You can’t play Toronto all the time.

A lot of people reading may not have heard your band before. Hopefully this doesn’t cheapen anything too much, but choose five words you’d use to describe your band.
Joe: Okay. Meaty [laughs], coherent… what else? Fuck. I’ve got two? Intense, melodic, and… that’s four? I want to say solid, or no bullshit. No – crushing. That’s the one.

Let’s say for the next three years, everything goes the way you’d ideally want it to for this band. Where do you see yourselves?
Joe: I hope we’d be writing a third album, nobody would be working (a second job), and we’d have a few months just to write an album, and then head out on tour. Just the constant cycle of writing an album, touring, album, touring…

You’ve done most of your recording using computer-based gear and a DAW. With these tools and technology at your disposal for dirt cheap, it seems that nearly anyone can put their music to record and…
Joe: Well, you can, but any band that’s putting out an actual album that they want sold [in the retail chains] is still going to pay for a producer and get another set of ears working on the project. I think [the computer recording equipment] has really helped us out in the pre-production stages, where we’re able to get things recorded, and then go through everything with a fine-toothed comb, weed it out, and make everything sounds good. That’s the way we do the vocals as well – just going over it over and over.

You and Tom (Emmans, vocals) are the only remaining members of the original lineup that did the Glass Barricade EP. Would you argue that Odium, at its core, is you and Tom?
Joe: No. Not anymore.

Why is that?
Joe: Now, we’ve got other members that input as much, if not more sometimes, to the band. Now, we’re a five-man team – finally. Everyone knows everyone else is going to do their best and get their work done. Dale (Burrows, bass) has really stepped up in terms of booking and keeping us organized at the whole. We’re finally where I want us to be. All these past years, I’d be going to the local music store with an ad for a bass player, and the owner said, “Does this not seem pathetic to you? You just keep losing people,” and he basically called me a tyrant. I just never wanted to settle until we had all of the horsepower we needed make this work.

One word answer without naming names, then. Is the lineup now, with the five guys you have, the best it’s ever been?
Joe: Yes.

The last few years, you’ve had the chance to play with some bands who are really at the forefront of touring Canadian metal bands – Arise and Ruin and Fuck the Facts, to name a couple. Considering some of the more experienced bands you’ve played with, how do those experiences benefit you guys in terms of what you’re bringing to the live environment? Were you able to take bits and pieces of those performances and incorporate them into what you’re doing?
Joe: Yeah, especially Arise and Ruin. They showed up, and there weren’t a lot of people at the Forum (in Hanover, ON), but by the end of their set, anyone who was there was at the front. They were really able to have a positive attitude. Some bands, when they play that venue and there aren’t a lot of people there, or even if there are a lot of people there, just don’t bring it. Those guys just laid it down, and it was awesome. As for Fuck the Facts, I don’t know what to say but “Holy fuck! That was amazing!” They’re a unique band and are doing really well, which is awesome.

Can you give a short rundown of how you first hooked up with Year of the Sun (Records) and how it came to be arranged that they’d put out your record?
Joe: Well, Dale and James (Wright, of Kerosene Media that does publicity for YOTS) had a college friendship. James ended up hearing the record, showed it to Benner (Chris Benn, YOTS President), and they picked it up right away. They said they wanted to do it, we thought about it for a week or two, and went for it. We went down to Guelph and had a chat with Benner. We were ready – we were at the point where we wanted to do this and it came at the right time.

So the music video – were you excited about that process?
Joe: I didn’t think it’d be that much work. It was a lot of work, man. We had to play the song through 20 times – and I’m actually playing. So that’s 20 times in a row, in a bush, in the middle of winter, so it was pretty grueling, but we got some good, good takes. Chad (Archibald, director) was very professional and knew exactly what he wanted to do. He was really efficient, and it’s going to look awesome.

Let’s start with the songwriting process from start to finish, using the last song you completed as an example. Can you race me through the process?
Joe: Well, Andrew (Fullerton, guitarist) had a couple of riffs that he recorded, and then I put down drums to the first half of the song. I tossed in a few Tool-ish parts and a big havy pitched screaming part at the end for Tom – Tom and Andrew, actually. Doing vocals is always an interesting process, but for this song, I don’t think we’re going to have much singing at all, but that’s not going to be a theme throughout the rest of the album. This song is just really heavy, and is more live-driven, too. Last time, all of the drums were programmed, which let us feel out our ideas and see how they’d play out, but this time we did the live drums to see how it really sounds. We’re just feeling it out more.

If you had to introduce a metal fan to your band either by giving them a copy of the record, or bringing them out to one of your shows, and that’s how they’d form an opinion of what you do, which would you choose and why?
Joe: Live. Whenever we play live, there are always people that really love it. The show we put on is really worth watching, man. It’s not better or worse than anyone else – it’s just top quality.