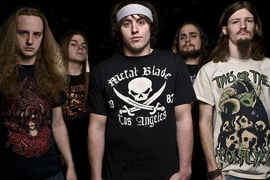 Kingdom Of Might the debut release for Metal Blade act Woe Of Tyrants was released on January 6th, 2009 and man, is this one hell of a CD. Every song is well-constructed, and heavy as hell. The band has managed to successfully combine numerous musical styles with a terrific final outcome. Thrash Metal, Black Metal and even Power Metal all seamlessly mix together to form a collection of heavy as shit melodic tunes that should appeal to a large portion of the Metal Community. Vocalist Chris Catanzaro took a moment out of his busy schedule to answer a few questions for PureGrainAudio.

Many of your songs are so hard and intense that I am sure they translate well into a live setting taking on a whole new life in front of a live audience. How does it make you feel when the emotion and power that you envisioned in the recording studio, come to life while playing in front of a crowd?
Chris: Well, honestly it has kind of worked in reverse, at least for me, in that area. The emotion and power was envisioned in a live setting, as that’s how the songs were written, and it was more of a battle to make sure the intensity shined through on the record. It is sometimes a bit of a challenge to get the same adrenaline in the studio without the crowd and the energy. However, the songs on Kingdom Of Might have been a blast to play live, at least for me, probably less so for the guitarists and drummer since they have to work a bit harder.

Different groups have unique ways of writing their songs. How do you guys go about writing your music? Is it a collective effort or is it more the efforts of one particular member of the band?
Chris: Well, we are very much into letting things develop naturally. Normally the guitarists will come up with a group of riffs that are not structured or organized just yet, and we’ll all just jam around with the material putting in opinions when we have them, and it ends up being somewhat of a collaborative effort.

Your brand new CD titled Kingdom Of Might was released on January 6th. Now that it is complete how do you feel about it? Are you satisfied with the outcome?
Chris: The main emotion I feel is relief. We signed with Metal Blade two months after releasing our first record, so we basically had to go right back to the drawing board as far as writing new material went. It was like we finished exhausting all of our ideas and everything for the first record, and then are asked to write a new one as soon as it was out. But the pressure was something we had never had to deal with before so with the challenge came an increase in our work ethic and also a deeper appreciation for the final product.

You worked with Joey Sturgis a very well known and well-respected producer (The Devil Wears Prada, Gwen Stacy, Brother Von Doom). How did you get in touch with him and what was it like working with him?
Chris: Joey actually got a hold of us, it had been a goal of his to record an album for Metal Blade, so he invited us to his studio, let us demo some material, and the product spoke for itself as far as he was concerned. Joey was an absolute breeze to work with, could not have been more hospitable or awesome. We loved it. Though he and I tended to slack a little bit due to our joint obsession with World of Warcraft.

It is good to see a number of bands breaking away from the usual gore/horror, misogynist and anti religious themes. What prompted you to pursue this specific course in lyrical concept?
Chris: Fatigue. I was at a show one night with a friend, and the two bands that were playing are extremely well known groups. These guys are all 30-40 year old men, but they are performing to 15-16 year old kids. These bands, and I am intentionally not bringing their names up, had all of this pornographic, satanic, demonic imagery being displayed on the screen hanging over their stage. I have never been a preachy type, as we are not a ‘religious’ band. Something clicked in me that day which allowed me to understand that you don’t have to be preachy to be a positive influence, and even though I’ve never really written hateful lyrics, I was going to make sure that the lyrics to this record would be something that any one of these kids could potentially relate to. The more success you have, the more of an accountability you have to your fellow person, and I refuse to jump on board with all of the garbage that some bands are feeding to innocent kids, no matter how uncool that makes me. Fortunately, even though I have a band that differs entirely as far as spiritual beliefs go, every one of us shares that same ideology that we do not want to see people hurt.

Along those same lines, the band keeps things interesting thematically. Can you talk about some of the subjects you tackle on this record?
Chris: I wrote this record attempting to keep it from being just a “Christian” album or whatever else I am sure it will be labeled. The albums theme tackles the clichés, of course the good versus bad, light versus dark type of imagery, but also has an underlying sort of third wheel that allows for a somewhat biased comparison between those opposites. The album is not telling everyone that they need to believe in God, or believe in Jesus, or anything of the sort. I do not have that kind of power. All I tried to do on this record was help to inspire the listener to at least consider their surroundings, when they are all alone standing on their deck looking at the stars, to just consider their lives. I am a firm believer in the ideal that truth does not fear investigation, and that being said I think that my purpose in this album was merely to invoke curiosity. If someone listens to our album and feels inspired to just make SOME kind of change in a bad area of their life, then I say mission accomplished.

When you are on the road for a while, I am sure you see and experience many different things you might not even have known existed. Are there any stories that stand out in your mind as being exceptionally strange or odd?
Chris: I have not seen anything too crazy, at least not that I feel I should talk about here, but I have seen some great things in our short time touring… Just areas of the country I would have never seen if I were not in a band, it has been a truly awesome experience. But, I am sure over the next year I will see some crazy things as we have tons of touring lined up, so you might have to get back to me on that one!

What is the one thing you travel with that you just cannot live without?
Chris: My phone. Not just for the business side of things, as I do everything through my phone as far as e-mails, contacts, etc, but also just to have that support from people at home, friends and family, that help to keep you sane. When you are stuck in a van with the same five guys all the time it’s nice sometimes to just pop on your iPOD and start a text war with a friend from home.

What is the toughest lesson you ever learned in the studio and on the stage?
Chris: In the studio, I have learned not to over exert myself. I had a bad habit of trying to do way too much in a day, which actually ended up putting me in a position where my voice was so blown out that I had to consider leaving the group. But over time, I learned the mistakes I was making in style and form and fortunately was able to rebound. Live, I think everyone in our group has learned that there is a time for drinking/whatever else you do, and there is a time for business. In a band that is doing what we are doing, it is our business. So while we don’t speak out against people drinking or doing whatever (because believe me, we partake as well), I don’t think any of us would be able to live with ourselves if we got too messed up to give the crowd the best show we’re capable of. Also, we have had lots of fights in our day, as most alpha males in close quarters will tend to do, but our band has a simple motto that has allowed us to stick together: Short memory. We had to go through a lot of fights and bitter grudges before we could always go to sleep with the peace of mind that the next day, no matter how bad the fight, it won’t mean a thing any longer. It has worked well thus far!

What song from that album is still exciting for you to sing?
Chris: “Break the Fangs of the Wicked,” the 3rd track on the record is still an absolute blast for me to sing live. I haven’t put my finger on what exact aspect of the song makes it that way for me (it’s one of the oldest on the record so I’ve sang it more than almost everything in our set) but I always get a certain set of visuals while we are playing ‘Fangs’ that are always entertaining. It just has a cool mood to it overall.

Playing such visceral music in a recording studio must be vastly different from at one of your chaotic live shows. How did the recording process go for your debut album Behold The Lion?
Chris: Either way, the studio and live are so different that it is almost like they are not even connected to the same cause sometimes. In the studio you’ve gotta be perfect, so you sometimes are doing multiple takes just to get one kick pattern to be dead on, or a riff on that is just a smidge off. Those little things kind of make it hard at times to maintain the intensity in the studio, and can be quite frustrating. The recording process from Behold the Lion was completely different from our new album mainly because we paid for Behold the Lion ourselves. We had to bust our balls and crack out nine songs in just two or 3 days. So we obviously could not pay as much attention to detail as we could on this new record. It gives you a more raw sound when you do it that way, but after experiencing both worlds I am definitely a fan of being able to make the record sound as clear as possible. Reason being, that with music that is as fast as our style of jams are, lots of the cool little things can get lost in the mix if you’re not careful.  [ END ]