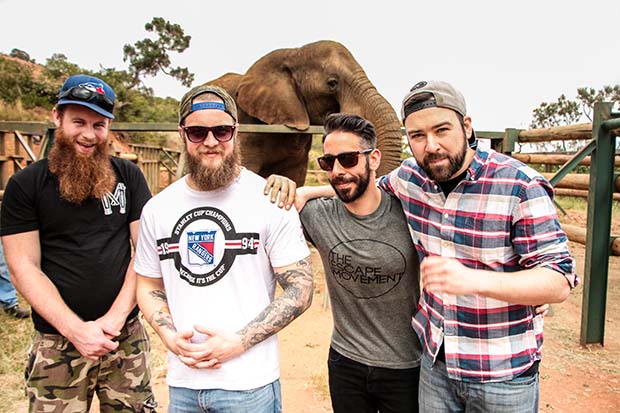 You can’t take anything that Rody Walker says too seriously. I learned that first hand when I talked to the Protest the Hero vocalist via telephone on Friday, January 16th. The Canadian band’s music is a sort of blend of screamo, metal and just not caring about what anybody else thinks. Protest the Hero is currently on tour with As I Lay Dying, and will be performing in the U.S. through February 10th before traveling to Europe.

I have read a little bit of background on you guys and I have to admit that I was a little nervous to interview you because I heard you like to mess with people.
Rody: [laughs] It’s not true, I get a bad rap! I just like to make jokes and sometimes people don’t like my jokes, ya know?

Well, I have a pretty good sense of humor.
Rody: All right, then we should work well… as boyfriend and girlfriend…

I read that the band formed when you guys were like 12 years old, any truth to that?
Rody: This is true.

How did that come to be?
Rody: We were just a bunch of dumb little fucks growing up in a shitty little town and, I don’t know, we just got tired of like, playing guns at recess. We started listening to bands like NOFX and we were like, “oh man, this shit kind of sucks we could probably do this ‘cuz we kind of suck.” And after that that’s how we came to fruition.

Nice. So that was about eight or nine years ago…
Rody: That was 10 years ago, we’re 22. It’s been a decade of just misery.

So how have you managed to stay together for ten years, not a lot of bands make it that long.
Rody: We’re all gay, no serious, you relieve tension with your brothers, we call it bj’s on the road. [laughs] We don’t argue most of the time… I’ve just been told to shut up. I don’t know, we just, we laugh at everything and nothing is serious. Pretty much. And I think we all know that our band is coming to an end within the year and we’ll be attending universities soon and hopefully never see one another again, so everything is trivial.

So have you ever been to Pocatello before?
Rody: Well, I know I’ve driven though Idaho before. I’m kind of like a goldfish, ya know, I have like a five second memory. That little fucking tiny castle is a surprise every time. But it’s like, I wake up and I don’t even ask where we are I just get up and roll into a venue and get drunk. Which is a huge problem with not remembering anything, getting drunk everyday.

[laughs] Ya, that’ll do it. So what it’s like touring with these other bands, As I Lay Dying and The Human Abstract?
Rody: Well, we’ve toured with them before. I imagine it will be great, we’ve toured with those bands on separate occasions and they’re quite good friends of ours except for one gentleman with flaky skin. He shall remain nameless, but you can print him in the paper as “the flaky boy.”

Ok, that will make a good quote [laughs] Good stuff. K, you were talking about your tour a little bit. You guys are in a new city every night and then you are going to Europe. How do you handle being on the road so much, don’t you ever just want to take a break?
Rody: We’ve flown home from tours because we wanted to come home, we were sick of being on the road with the bands we were with. It depends on variables, ya know? If we’re on a tour that’s really long and we haven’t been home in a couple months but the people are nice it makes it a little more bearable, but if you get out on the road in the same situation but the people are shitheads and, I’m not gonna mention names but there are bands out there that we certainly do not get a long with, just, we leave, ya know, we pack up and we go home. Because we’re young, nobody’s making very much money, it’s obviously not about that, if you’re not having a fucking good time get the fuck out of dodge, ya know?

Ya, we don’t need that! It’s just a piece of paper, easily ignitable! So what do you guys do before a show to kind of pump yourselves up?
Rody: Um, we drink. I like to have six beers before we go on and a couple shots of whiskey. I used to smoke a bunch of cigarettes but I am 10 days off cigarettes as of today.

Congrats!
Rody: Thank you. Ya, we’re not superstitious at all.

You don’t have to have a bowl full of brown M&Ms or anything like that?
Rody: No, we really don’t give a shit. We know a lot of bands who do little cheers before they go on or praise God or have a prayer or something like that and we don’t give a fuck, we go out and play, poorly, and come back and continue what we were doing before hand as if it never happened. That’s kind of it.

Have you guys had any time to write or work on anything for future albums?
Rody: Ya, definitely, we’re looking at summer time for writing a new record. Apparently they wrote a new song the other day. I wasn’t there, I just have stopped going to practice all together, for reasons that are completely beyond me. And I play it off on the Internet like I’m really cocky, “I don’t fucking need to practice, I’m awesome,” and all that. But really I just can’t bother to drive down there, I should, ‘cuz I need to practice. [laughs] But, whatever.

Ok, well would you like to add anything?
Rody: No, I think I’m good!

Ok, well, thanks for your time, I know your busy.
Rody: It was nice talking to you and I assure you, I’m not busy.

Ok, well I will see you at the show.
Rody: Thanks!