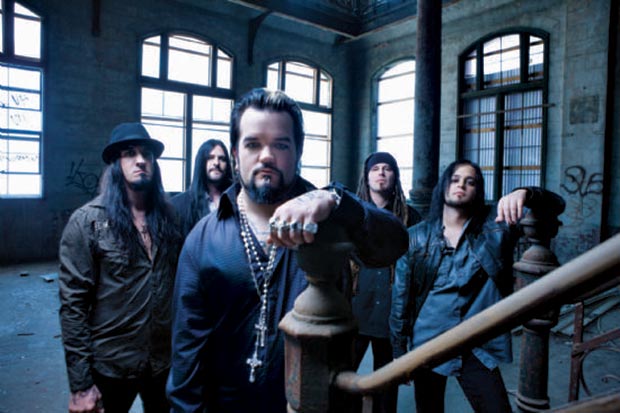 One of the most consistently successful rock and roll bands of the last decade has been Memphis, Tennessee’s Saliva. These guys have managed to consistently put out hit singles from their first big hit “Click Click Boom” to “Ladies and Gentlemen” and their latest hit “Family Reunion” from the group’s new record Cinco Diablo. So far Cinco Diablo has proven to be another solid release for Saliva and word is that the band is currently working on a reality TV show about the recording of the new album as well as what it’s like to live life on the road. Currently, the band is just about to embark on a U.S. tour that will run right through until about mid-February. Expect to see them out on tour throughout the spring with a more major summer tour to follow. Recently we spoke to Saliva’s lead singer and frontman Josey Scott to ask him a few questions about what’s going on with his band.

The band is currently out on tour in the US. How has the tour been going so far? Are you pleased?
Josey: It’s going good man, all the shows have been pretty packed and you know, we love being out on the road and being out here with our fans and rocking out, it’s awesome.

The new record Cinco Diablo, Saliva’s sixth studio album is just about to be released. How do you feel about the record and what’s maybe different about it compared to the four previous albums?
Josey: Ah, I think it’s a little heavier. On the last record, we got a really big reaction from the heavier material on Blood Stained Love Story so we kind of planned on writing a heavier record this time and it’s definitely got a lot more balls to it. It lends itself to sports, movie trailers and all kinds of shit like that that we’ve always been involved with and wrestling and all of that.

Cinco Diablo is of course the follow up to Blood Stained Love Story and it comes less than two years since the release of said album. Nowadays bands are lucky to get a record out every three to four years, how did you get this one out so soon after the last record?
Josey: Um, the record company okay’d it and we had been writing material the whole time we were on the road for Blood Stained Love Story so we had a wealth of material and we wanted to go in and knock it out as soon as possible and they gave us the green light so we were able to go in and do it.

What was the writing and recording process like for Cinco Diablo? How many songs did you write in total?
Josey: I think we had about twenty five songs when we went in and we sort of whittled it down with our producer Bob Marlette who worked with us on the second and third album and then we did the fourth album at home in Memphis with another guy and then we went back to Bob and did Blood Stained Love Story with him out in LA. He’s kind of like a father figure to us, he’s a really cool influence on our music and he knows how to get the best out of us.

Yeah that leads into my next question actually; I know you worked with Bob previously on previous albums. Why did you decide to go with Bob again?
Josey: I think because like I said he knows how to get the best out of us performance wise and he really has his finger on the pulse of what we like to do song writing wise and he’s a really good song writer, he knows how to get the best out of a song. After all, you know, you can have the best band in the world and not have good songs and you won’t have a day’s work. I think it’s all about the songs and he knows that we like to make every song an event and not just a couple of singles with a bunch of filler.

Do you have a favourite song on the album?
Josey: Ah, I like “My Own Worst Enemy” a lot; it’s probably one of my favourites. We wrote that one, it was one of the ones we wrote right there in the studio and it was sort of about the troubles that we’ve been through and a couple of mountains we’ve had to climb and things we’ve had to get over in this crazy ass lifestyle we live. Sometimes you end up being your own worst enemy so yeah, that’s definitely one of my favourites.

The title of the record Cinco Diablo is interesting to say the least. Where did this title originate from and what does it mean?
Josey: I think it just means, you know, the five of us, the fifth record, the fifth national release, we wanted to call it, having something to do with the number five. My birthday is around Cinco Damio and I just recently got back from a trip to Mexico and I was like “why don’t we call it Cinco Diablo?” And uh, we all thought that was pretty cool and it ended up being the title. The album cover’s actually a picture of a baby in utero, it’s a sonogram picture of a baby, one of the guys’ wife was pregnant during this record and they had a really cool ultrasound picture of the baby and the baby looks like he’s throwing up metal horns, we kind of fixed up the picture and made it the album cover.

Even though most of the band has been together for years, the latest member of the band Jonathan Montoya just joined the group a couple of years ago. How did you meet Jonathan and what made you decide to go with him?
Josey: He was in another band on our label actually called Full Devil Jacket and we’d been on tour with him since we were kids, he’s from Jackson, Tennessee just up the road from Memphis. He’d actually filled in for the original guitar player when he was in rehab, he did a tour with us over in Europe filling in at that point and he was always a really close friend and we respected him as a musician and a writer. We just knew it would be a good fit so when that transition happened he was the natural choice for us.

Saliva has been quite a long time now and you’ve enjoyed some great success in your time together. What do you think the future holds for the band? Do you see this group going on for years to come?
Josey: Just staying on the road, trying to make the best music we can possibly make for our fans and living to fight another day man. It’s a difficult world we live in, we have to be equally as difficult. [laughs]

So we can expect to see you guys around for lots of years to come?
Josey: Absolutely.

Awesome, you mentioned this a couple of minutes ago, over the years you’ve supplied a lot of your songs to the WWE for their shows and events. How did this whole association come about? Are you guys all wrestling fans?
Josey: There’s a guy that does the music there named Jim Johnston who’s a really good friend of ours and he called us up back on the first record Every Six Seconds and had us write a couple of intro songs for a couple of different wrestlers and we just ended up locking horns on a lot of really cool, heavy, creative stuff. Our music seems to lend itself to wrestling really well and it was just a really good fit for us so we’ve had a long standing relationship with them, they’re really good people and they seem to get it you know…

One very cool thing that the band did recently was play during the halftime show of an NBA game back on Halloween this year. How did this come together and what was it like being out there playing for a huge arena of people that maybe weren’t necessarily fans of the band?
Josey: It’s always cool to play huge arenas, it was really cool because it was our hometown team, The Memphis Grizzlies and we got to do it on Halloween which is Wayne Swinny’s birthday so it was really cool. The NBA and the NFL have both used our music over the years, so we’ve always had a really tight relationship with sports. We’ve had our music played in everything from the NHRA to NFL stuff, NBA stuff and Nascar stuff as well so it’s a really cool thing to be involved with.

What does Saliva have planned for the New Year and into the summer?
Josey: To kick some ass [laughs], as always, stay on the road, stay busy, keep playing for our fans and keep bringing the show.

Do you have any special summer tour plans in store?
Josey: I don’t think anything concrete just yet but we’ll keep you posted.  [ END ]