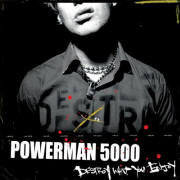 Powerman 5000, yet another Industrial Metal band, have been around for quiet some time. From way back when, Spider One (Michael Cummings), began recording his own solo work, and eventually formed Powerman 5000, ultimately unleashing some of the best Industrial music to date. Quite a bit of people expected huge things out of Spider One, considering he is the younger brother of Rob Zombie, and man, did he ever live up to it. Powerman 5000 is Spider One (vocals), Siggy 00 (bass), Mr. 7 (drums), Terry Corso (guitar), Johnny Rock (guitar).

The first track on the album is “Construction of the Masses Pt. 1” which is only an introduction to the album and eventually opens up to “Destroy What You Enjoy.” Of course, everybody noticed that’s the name of the album, duh! The track was in perfect timing, and the vocals were excellent. The only part that disappointed me is the fact that track isn’t very industrial, it’s closer to punk. Either way, the song was pretty damn good.

Fifth on the album is “Enemies.” Again, the track is a more punk than industrial. The instrumental was played amazingly well, with no fumbling or screwing around. The bass was spot-on perfect and the drums, oh man the drums. One word – awesome!

Tenth up is “Who Do You Think We Are?” which is indeed a more Industrial track, touching back to their original roots. The distortion is radical, taking the music style from a completely different angle. Spider One’s vocals sound more like his original singing style as well, which I loved.

Overall, the album was pretty good. I will admit though, I am little bit disappointed how they diverged from the Industrial style a bit more than usual. Nonetheless, the album was recorded amazingly, played amazingly, and just in general kicked some ass. I give this one a 7.8/10.  [ END ]