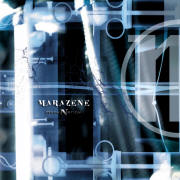 Industrial Metal is a genre of metal that not a whole lot of people seem to be interested in these days. In my opinion, Industrial Metal is one of the best genres metal has to offer. It’s got a mechanical feel about it, with less screaming than Death Metal, but still seems to give off a very dark image to the listener. Marazene is one of those bands that takes full advantage of every aspect of Industrial music. The band consists of sKUM (vocals/guitar/keyboard), DieTrich Thrall (bass/guitar/backing vocals), Kristov (drums). When playing live though, sKUM doesn’t play guitar nor does DieTrich. Instead, they get Daniel Gash and Jeph Stiph to fill in for them.

The first track on the album is “Béte Noire.” The track opens up really slow and quiet, and got me thinking that it may just be an opening for the entire album. It might just allow the listener to ease into the album for 5 minutes. Roughly 30 seconds into the track however, the quietness dissipates, and the guitars and drums kick in immediately. In the background, there is a mechanical-type music which persists throughout most of the song. As I mentioned before, Marazene takes full advantage of the Industrial genre. That being said, the singing style in this song, at some points resembles that of Spineshank and even Tool, which I might add, is a compliment! To be able to resemble great bands is a huge accomplishment.

Fifth on the album is “Give (SkumFuckerz).” Before I even heard the track, I knew I would like this song. It put off a vibe saying basically ‘Fuck Off’ and man was I right. At one point he says “Give me a pill, I’ll pop it.” I don’t exactly know what the song means, but it could possibly imply that he just doesn’t care anymore, but I’m most likely wrong. The instrumental throughout is fairly simple, but sounds utterly awesome nonetheless!

Eleventh on the album is “Self-Worth.” The intro alone sounded pretty impressive, resembling Mudvayne a little bit. sKUM’s scream near the end of the first verse was really creepy, and caught me off guard. Totally unexpected, the way it should be! The entire track is catchy and is the type of song you’d listen to and nod your head without even noticing you’re doing it.

Overall, I’d have to say that this album kicked some serious ass! 15 Tracks of total adrenaline which should help in many ways to rekindle a seemingly lost love of Industrial Metal. I’m gonna give MachiNation an 8.9/10.  [ END ]