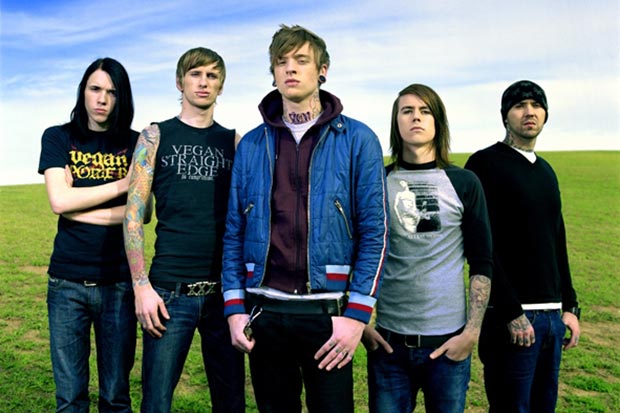 Interview with I Killed The Prom Queen vocalist Ed Butcher

From the land down under comes the metalcore band with maybe the coolest name around, I Killed The Prom Queen. The band formed around the year 2000, but as recently as last year, they split with their lead singer Michael Crafter. Even though he had recorded all of the vocals for the band’s latest disc Music For The Recently Deceased, his vocals were scrapped in favor of new vocalist Ed Butcher. Butcher was recruited from a British band called The Hunt For Ida Wave and things seemed to be going well for I Killed The Prom Queen until surprisingly, Butcher announced at the end of January that he would no longer be singing with the band due to a severe case of home sickness. In an interview done shortly before his departure from the band, we spoke to Butcher about his new role in the band and how he was fitting in.

First of all, how’s the tour with Silverstein been going so far?
Butcher: It’s been going really good actually, we did some dates in America with them as well and now we’re well into the Canadian dates and we’re having fun, it’s going good….

I Killed The Prom Queen is definitely a very original and cool sounding name. Since you just joined the band you might not know, but do you know anything about the origins of the name?
Butcher: I think it actually came from a horror movie, some line they thought was cool or something and it sort of caught on.

Your new record Music For The Recently Deceased was just released a few months ago. Now that it’s been out a while, how do you personally feel about the record?
Butcher: I’m pretty happy with it yeah, it’s come out really well, we’re all so happy with it and it seems to be selling well as well, we were overwhelmed with how well it did the first week in the United States and stuff and back home it’s doing really well for us so yeah, we’re really happy.

Your latest album was produced by the notorious Swedish producer Fredrik Nordstrom from the band Dream Evil. How did the whole idea to have Nordstrom produce the record come about?
Butcher: Um, I think he’s done a lot of our favorite records and stuff like that before, I mean he’s worked with a lot of our favorite bands as well so it just seemed like a good idea. We sent him a couple of demo tracks and he was psyched about what he heard, he was keen to record with us and he even said that he’d like to work with us again on our next album which is quite a compliment as well.

So the whole recording process with Nordstrom went well?
Butcher: Oh yeah, it was mind blowing, it felt crazy being there and seeing all the CDs he’s recorded and stuff and hearing all the stories he had to tell, yeah it was crazy….

What was the writing and recording process like for Music For The Recently Deceased? How long did you write for? How many songs did you write?
Butcher: I wasn’t actually there for the whole writing process; um I wasn’t in the band yet, but yeah, they sent me a copy of the CD about last October, 2005 and showed me all the music and stuff and asked me to write lyrics for it, but I can’t really answer for the other guys in the band since you know, I wasn’t there for it all.

How did the whole lyric writing process go for you?
Butcher: It was kind of tough for me actually because at that stage I’d never practiced with the band before, I couldn’t really get the real feel for the music, so I kind of just had to listen to the CD over and over again and um, yeah just write lyrics for it and get my own kind of taste of what it was like. The first time I really heard it properly together was when I was recording it in Sweden.

That must have been very hard for you, because usually bands jam songs out together and they’ve been together for years. Did you just get a demo tape or something of music and then you tried to put lyrics to it?
Butcher: Yeah, it also had the old vocalist’s vocals on it as well so I had to try to blank him out in my mind so it was really tough.

Yeah, a difficult task for you but I guess it turned out pretty well…
Butcher: Yeah I mean they were all happy with it which was kind of a worry for me as well because I wasn’t sure if they were going to be happy with what kind of lyrics I was writing and the melody and stuff but everyone seemed happy.

How did you first meet the other guys in the band and how did you eventually become the new singer?
Butcher: Um, last year when they were touring Europe and the UK, my old band supported them for a few shows in the UK and they kind of saw me perform I guess and they liked what I did, then they just kind of kept in contact when they went over to the States. Then eventually they told me that they were parting ways with their current singer and um, I was sort of interested to see what I could do and they asked me if I was interested in joining and they sent me the music and asked what I thought….

Were you a fan before joining the band?
Butcher: Um, pretty much everything but the vocals…. [laughs]

Do you feel that you’ve helped the band’s songs evolve?
Butcher: I think it sounds a lot heavier now, my vocals are a lot more metal and death metal influenced so I think I’ve helped it out, yeah….

Certain bands that get a new singer prefer to omit older material from the band’s older albums in their live set, while others embrace their past songs and play them live. Do you only play material from the new record now or have you adapted some older songs to fit in with your vocal style?
Butcher: Um, when I first joined we were playing a couple of old songs and I’d put my own twist on them but now we’re just playing new stuff which is a lot better for me.

Did you find it hard to adapt to those old songs?
Butcher: Not so much hard but I really didn’t enjoy it. I just didn’t get the feel for it as much and I wasn’t a fan of the lyrics really so it wasn’t working for me.

The present seems to be very good for the band. What do you guys have planned for 2007 and beyond?
Butcher: Um, right at the start in January we’ve got a tour in Australia called the Boys of Summer Tour; we’ve got Misery Signals to support us for that. After that, we’re in Japan in February and then we’ve got plans for the States, Europe and the UK as well as well as writing the new CD.

Is this your first trip to Canada or have you been here before?
Butcher: Yeah it’s my first trip; I’m pretty psyched about it because I got family here as well.

What do you think of the country so far?
Butcher: Um, I like it, it’s really nice, a couple of the guys haven’t seen snow before so they were pretty psyched about that. [laughs]  [ END ]