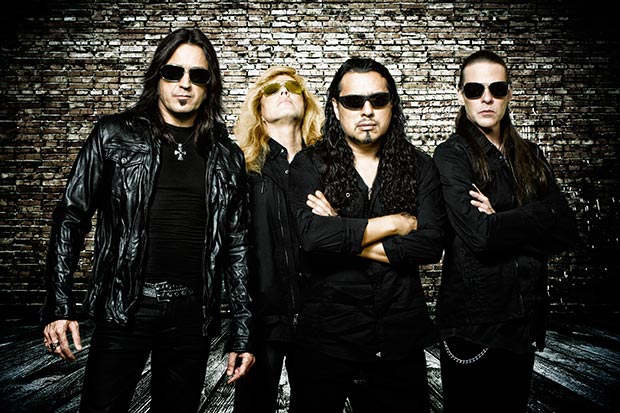 Eighties hair metal band Stryper has announced that they will be recording a new studio record in 2005 this will be the bands first full-length studio record since 1991. The release is the culmination of a reunion tour that began on May 21st 2000 when all four original members took the stage at the first annual Stryper Expo in New Jersey. This was followed by a sold out show in Costa Rica which marked the bands first formal performance in over nine years. A subsequent thirty-five city tour ended in a sold out performance in Puerto Rico which was recorded for an ucoming DVD release. I recently spoke with lead singer Michael Sweet about the Stryper reunion and how changes in technology and the music business over the last decade have affected the band.

Stryper has been out of the music scene for over a decade. What made you guys decide to reunite?
Michael: Well I was always one to say over and over again, you know for years, that it was not the right time, when God says go do it we will do it. Not that we would sit around in the woods and wait for God to say go do it, it was not like that at all. I just wanted to make sure that God’s hand was upon it, especially for a band that always stood for God’s message; that was important. I just never felt that it was the right time, up until we got together in January 2003 when we recorded the two new songs for Hollywood records. That was when I felt it. That was the beginning of the tour; where it all began. We started talking about a show here and a show there and it just sort of happened. God’s hand was all over it and that is why the tour was such a success. It was just the right time and it couldn’t have been more perfect.

Along those same lines how has the fan reaction been after so long of an absence?
Michael: You know, it’s been really good and that kind of ties into the whole timing thing. I certainly didn’t want to go out there because every one else was doing it, call it rebelliousness or whatever you want to call it. I am just the opposite, if everyone else is doing it, I don’t want to, that’s just how I am. We weren’t going to go out because Poison and all these other eighties bands were doing it. So we held off and I think because of that the fan reaction was much better. There was no burnout we were pretty much one of the only bands, you now hair bands from the eighties, touring at the time and it was cool; refreshing.

Based on previous interviews that I have read of yours, the reunion tour was supposed to be a one time deal. Is that sill the case or are you planning to do more live shows? What about a new studio album?
Michael: Yeah, there is some news that I can’t talk about yet. I can’t go into detail but look for news in the next three to four weeks. We will be making an announcement that I think will blow everybody’s mind. I’ll just leave it at that.

Stryper has a new CD out called “Seven Weeks in America”, how has it been received?
Michael: You know, for what it is and how we made it, it is doing exceptionally well. You know it wasn’t released on a major label and it hasn’t sold five hundred thousand copies so by those standards, no it’s a bomb. But we are not going by those standards. We are going by the fact that we released it on our own start up label 53:5 records and we are looking at about fifty thousand plus units, and we are thrilled about that. We didn’t do a lot of marketing or promotion, there was no radio single, we just stuck it out there and we are very pleased by the results and what has happened so far. It looks like very soon, in the near future, part of what I can’t talk about, is the fact that that record is probably going to get re-released and handled right, with better distribution.

Technology has changed the music business dramatically How have these advances changed your approach to songwriting and your live performance?
Michael: Well, I think it is the old double edge sword theory, you know it’s good and bad, there are pros and cons. Technology has changed immensely and , yeah you can do so much. You can take a bad singer and make them sound decent; you couldn’t do that in the past. Well, that’s not entirely true because you could hit that record button a thousand times until you got the right word but my point is, with things like Pro Tools and all the other things you have available; like auto tune, and pitch correction you can make someone who can’t sing into someone who can. So in that regard I don’t think it is such a good thing. What happened to talent? You know having the goods to deliver naturally? So in that regard I don’t think it is a good thing. But in the regard of it saving people a lot of time and money, especially people who are trying to do things on their own, I think it’s a good thing. Myself for instance, I was able to do a record for around twenty thousand dollars which was fantastic. We spent all the money on recording the drums in a studio and everything else was done at my house and it sounds beautiful.

Has the files sharing proliferation affected Stryper at all?
Michael: Not really, you know it possibly has but I personally haven’t seen the effects of it yet. I think there are pros and cons to it. Like the fact that you can go on iTunes and download a song for ninety-nine cents. That’s a great thing, but then again is it? From the artist perspective it may not be a good thing because will those people buy a record or just one or two songs? You now, is that going to change the way records are done? Are bands going to be recording singles now? I don’t know. You know what though? It could happen, it is possible. It’s kinds of scary, I mean my kids live on I iTunes, they used to go out and buy albums and want them for Christmas and stuff but now they listen to the whole record and buy the songs they like, so I am seeing it first hand. If I were a label I would be nervous. I think it s a great thing but it could be a very bad thing; only time will tell.

How is it different recording a CD on a major label as opposed to recording it independently like you did with your new CD?
Michael: Well, the great thing about recording with a major label is the fact that they do shell out good money, you know up front money. They may give you two hundred thousand dollars and that just means that you’re not going to get any royalties unless you have a million selling record, that is the sad thing about it. Doing it on your own is great because it means you have creative control and you don’t have people pushing you around and telling you what to do; you can go at your own pace The problem is when your doing it on your own, how many people can you get it out to? But when you sign with a major label there is no guarantee that they are going to release it either unless you have a guarantee clause or a marketing clause. It happened with my solo record.

How do you think you have grown as a songwriter and a musician over the years?
Michael: Well, I think the one thing that I do is stay up on a lot of the new music and that’s because I have two kids that stay upon new music. So what is out in my car right now is a band called Keene. They are awesome, it’s like the Beatles meets Cold Play meets ABBA, they are awesome. Anyway I stay up with a lot of the new stuff, my son is into a lot of the pop punk bands and my daughter is into a lot of pop R&B bands and because of that I am always listening to something new and I think that has really rubbed off on my songwriting style. I mean thank God I am not still writing eighties anthem stuff, which I think is what kills a lot of eighties bands. You want to have flavors of your original sound but with something new. In order to do that you have to stay up on new music and production techniques. And if you don’t stay up on that stuff you are going to be a dinosaur and that is how you’re going to sound.

That brings me to my last question. What do you think of all the newer bands that have a positive message and were probably influenced by Stryper, bands like Creed and POD.?
Michael: You know what, I think it is great, I do, and I am big into that. Whether they are believers in God or not; I hope they are but in the times we live in people need to be encouraged and uplifted instead of torn down lyrically. Music is so strong, so powerful, and such an amazing tool and bands that don’t take that into account and feel that they are not responsible for their message is a bunch of baloney. So these bands that have positive lyrics that give people hope, I applaud them, you know I think we need to see more bands come out like that. I think it is great.