Sometimes things take time, longer than we would have liked, but all that really matters is if we get there in the end. Such is the case with singer-songwriter Roger Street Friedman, who recently released his fourth studio record Love Hope Trust. For all you Americana fans that are old enough to remember, you may recall Friedman’s name from the early 1990s when he was more actively writing and releasing music. Love Hope Trust is part of a second chance for Friedman, his fourth release since he returned to music with his 2014 album The Waiting Sky. He had left music behind altogether, but after experiencing some significant life changes, he found himself drawn back to it. Some of these life changes included the death of his parents, getting married, and having two children. Music felt like something he needed back in his life, so here he is, back at it.

Love Hope Trust is like a series of musical snapshots of modern life. It’s Friedman’s point of view on the divided world that we live in while also touching on personal journeys embarked on from his own life. Sonically, the record was inspired by 1970’s folk-rock, with artists such as Cat Stevens and Jackson Browne having the most specific influence. The songs bring some life to the mundane aspects of everyday life, which makes them relatable to all listeners. It’s a very rootsy record, produced by acclaimed producer and songwriter Larry Campbell, a Grammy Award winner who has worked with many great folk artists like Bob Dylan, Levon Helm, Judy Collins, and Willie Nelson.

To gain further insight into his personal story and evolution, Friedman joins us today for a special guest blog in which he discusses his early years as a songwriter, his move away from songwriting, and his subsequent, triumphant return to what he does best.

“I was born to make music… but it took a 25-year hiatus and a few earth-shattering life events to realize it.

I was born into a music-loving family. My earliest memories are of my father blasting Dvorak, Beethoven, and Stravinsky, on his Dynaco stereo on weekend mornings. He also loved folk music, Woodie Guthrie, The Weavers, Pete Seeger… and the standards… Ella Fitzgerald and Billy Holiday, Duke Ellington, Count Basie and on and on. My older brothers would play and sing folk and blues and Beatles’ tunes in the living room. I started playing the guitar when I was 7.

My first guitar teacher was an ancient man named Tony Ruffulo. He taught me scales. I would have to play the scales, and if I hit a wrong note, he would tap me on top of the head with a drumstick. Old school! All I wanted to do was be able to play with my big brothers, but I was not good enough and would be banned from the jam sessions until I was about 10. By then, I knew how to play and strum a few chords, and knew some songs, so they tolerated me trying to play along!

I started writing songs when I was 12 and played in bands in high school. After graduating, I enrolled in music school but dropped out after six months to join a rock band in NYC. When that band broke up, a friend and I built an eight-track demo recording studio in his mother’s basement. This was pre-digital recording, when gear was very expensive, so we taught ourselves how to get great sounds with microphones, the mixing board, and analog tape. The idea behind the studio was that we would earn enough money recording other bands to support ourselves while also recording our own music to pitch to labels.

Everything worked out great… except for the part where we would be able to support ourselves, record our own songs, and pitch to labels! I was no longer happy living with my parents, and decided I needed a reliable source of income, so my partner and I agreed to that he would buy me out of the studio. I went and got a day job figuring I would do it for a few months until I figured out my next move in the music business. The next thing I knew 25 years had gone by… and although I’d never really abandoned music fully, I put it fully on the back burner.

Then, within the space of two years, my dad passed away, I got married, my wife became pregnant with our first child, and two weeks before my daughter was born, my mother passed suddenly and unexpectedly. It was the ultimate emotional rollercoaster, from the depths of sadness, to the heights of joy, then back to sadness… and then, from deep within, the sadness, the beauty and blessing of a beautiful, newborn child. Something cracked open in me, and I started writing songs again. A lot of songs.

We had a babysitter whose husband had a recording studio in their home in Brooklyn. I mentioned to her that I had some new songs, and she suggested I work with him on a demo. I gave him a call and booked a few hours. It was my first foray back into the studio in 25 years. While I was recording the scratch track, playing and singing into the microphone, all of a sudden, it felt like a scene from a movie where the world goes from black and white to colour!

I had forgotten how much I loved the act of recording, playing, and singing. I had an epiphany right then and there. I realized that I had left a very important part of myself behind when I’d left my music behind some 25 years earlier. I realized that to really fulfill my purpose in this life, and to be fulfilled personally, I was going to have to find my way back to making music again. To be sure, there were other events and forces that inspired me, and worked in my favour to enable me to follow the path, but the main driver was that day in the studio.

In the intervening 14 years since that day in the studio, the stars have aligned for me. I kept writing, started performing and touring, and released four albums. While recording my first album (in 2012) I met Larry Campbell, who was called in by the producer to play on a few tunes. Larry is one of my all-time favorite producers/musicians and was very supportive of my songs. When I was in the planning stages of my third album (2020’s RISE), my wife and I went to see a Larry Campbell and Teresa Williams show (which was incredible!). Larry was hanging out talking to fans after the show, and I went up to say hi. He gave me a big hello, and we chatted for a bit. I asked him if he’d be interested in producing my next album, and he said ‘absolutely.’

I couldn’t have imagined at that moment what working with Larry would mean for my music. He brings so much depth, knowledge, and sheer musicality to the recording sessions that it can’t help but make my songs the best that they can be. The experience of working with a producer and musician of his calibre has elevated my writing and playing to a new level. He explains that he sees his role as producer as trying to help the artist achieve his or her vision. With both albums, Rise and Love Hope Trust, he has done that for me in spades.” 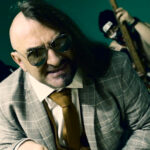 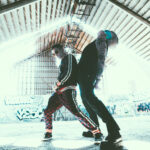