For what amounts to essentially a brand new band, The Silence has already gotten things pretty well figured out, as you’ll observe on their brand new single “Winter.” Bands less than a year old don’t usually sound this accomplished and self-assured, but The Silence sure does, with the fierce attack of “Winter” and the infectious vocals of lead singer Lewis Astbury.

There’s a very noticeable classic post-punk quality to this track, with its relentless riff work and Astbury’s vocals bringing back memories of punk stars gone by. It’s a stellar single that already has the sounds of the song that will likely be the band’s show closer for years to come.

Commenting on “Winter” and its accompanying lyric video, Astbury says:

“Lyrically, ‘Winter’ was very cathartic to write. It’s essentially an inner-monologue in song form. I came up with the lyrics during a particularly cold winter’s evening, usually while walking around the city alone, I tend to lose myself a little in daydreams, introspection, etc… But on this night, it was so bitterly cold that I could barely think of anything else!

I thought it was a really interesting juxtaposition, the enormity of becoming lost in thoughts about the past, future, etc., versus the total, immediate here-and-now sensation of the cold, and so I decided to write about it! Musically, I think the track recreates that feeling perfectly: sparse, unforgiving dissonance with sudden, fleeting moments of melodic clarity!”

Astbury formed The Silence earlier this year along with his bandmate and friend, bassist Oliver Peck. In the beginning, they were essentially just improvising, pulling together some riffs they had come up with, trying to match them with lyrics, and recording it all on some home demos. Once lead guitarist Luca Siegel and drummer Lee Hutchings joined in the middle of the year, things rapidly started to come together, and the songwriting process got the shot in the arm it so much needed.

Now, as we approach a new year, The Silence has its first shows lined up and continues to write new music. It all comes together sounding probably a lot better than it should, which speaks to the talents and chemistry of these four men. 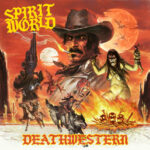