Although he’s been internationally popular for over two decades now, with each passing year, it seems that Dwayne ‘The Rock’ Johnson somehow keeps becoming increasingly popular. Lately, he’s been ruling the box office as the lead in the DC comic book movie Black Adam, and the public just seems like they can’t get enough of the wrestler-turned-actor.

You can count Miranda Joan as a big Johnson fan, so much so that she recorded a song in tribute to him titled “I Love You, Dwayne.” The single is significant for the Canadian singer-songwriter, for it reveals a different side of her personality with the more comedic and playful tone she took when writing and recording the tune. In writing the song, Joan was drawn to Johnson’s life story and his persistence and values. A family-loving individual, Johnson’s work ethic is unmatched, and that’s been the case since long before his popularity really began to blossom as a WWE wrestler in the late 1990s. She was also delighted by his Canadian roots as a former Canadian Football League player before his wrestling career and his father’s history as a Nova Scotian-born Black Canadian.

With Joan having recently released the official music video for “I Love You, Dwayne,” we connected with her for our latest Behind the Video interview to discuss the background and concept behind the clip, the shooting process, and how the video relates to the song.

Who directed the video?

Miranda Joan: “The video was directed and shot by Alexandra Martin. We have worked together on many projects, including three music videos and many photoshoots. She is a true partner in crime, and much like our previous projects, it was a very collaborative experience. I love what she does, I love her energy, and I love working together. It is really the best to have great friends who are also extremely talented; it never feels like work and looks a lot more like play.”

Where did the concept/idea for the video come from?

“The concept for the video blossomed from the concept of the song, which is a parody love song to Dwayne ‘The Rock’ Johnson. It started as a joke gone rogue between my brother and I while we were separated during lockdown, and no one knows how to run a joke into the ground harder than us. And so the video was born after a couple glasses of wine and a peruse through the cardboard cutouts available of The Rock online. From there, I started to build on an idea around the video that volleyed between shots of myself and the Dwayne cutout and the classic Dwayne ‘90s look, which is what’s featured as the album art.”

Where was it made?

“The video was shot in Greenpoint and Williamsburg, Brooklyn. I am Canadian and split my time between New York and Vancouver, but at the moment, I’m based in Brooklyn. We chose these neighbourhoods firstly because Greenpoint is where my friend lives and where we had roof access to shoot and secondly because there is a lot of outdoor space in these neighborhoods that were going to work well with our shot ideas.”

What was your favourite part behind the creation of the video?

“The entire thing was a blast start to finish. I mean, a group of women carting around a life-size cutout of The Rock, eating pancakes, drinking tequila, and watching me doing whatever ideas popped into our heads, it’s hard to go wrong. I do think a highlight for me, though, was dressing up as an actual rock for the ‘you are my rock’ drone scenes we did amongst a bunch of rocks by the shoreline in Brooklyn. It just made me laugh!”

If you could get one actor to play in one of your videos, who would it be?

“Not to be extremely on the nose here, but the question sort of answers itself. If I could get one actor to play in one of my videos, it would be Dwayne! My dream is a remix or extended cut that features The Rock, and we go full throttle on an alternate video!”

Is there any part of the process you’d do differently now?

“I would try to avoid shooting a music video on a roof with a giant canvas screen while the aftermath of a hurricane is blowing through… If you watch the video, you’ll see in some of the green screen shots that the background is moving. We did the lip-sync part in three takes because the wind was really picking up, and we were growing increasingly concerned that the backdrop would double as a sail and fly off into the streets of Brooklyn. We had sandbags and people holding down either side!”

“The hurricane piece was unfortunate, but another mishap that sticks out is that my creative producer Mikaela Gauer ate a wasp. We had cans of coffee for the morning, and she’d put hers down on the ledge of the roof where we were shooting the first scene and right before we began she went for a sip, and a wasp crawled out from the can into her mouth and stung her! It was out of a horror movie! We recovered, but it was unfortunate, to say the least.”

“If money was no issue, I think more time would be a part of my perfect video process. Being independent and self-financed, we had to do the best we could in a day. Simply coordinating everyone’s schedule was a challenge because when you don’t have a big budget, it’s hard to lock people down far in advance. I did my best to prepare, to write a production timeline and shot list ahead of the shoot, but the actual logistics and shooting all came together quite last minute. Everyone was available, and we just had to go for it.

“All to say, I think money helps with that side of things, as well as having the luxury to stretch the shoot out over a couple of days versus a mad dash from sun up to sun down. We had a great time, and I’m really happy with how it turned out, though, so everything in perspective!”

“In my mind, the video is another opportunity to tell a story or establish a vibe. In this case, the hope for the video was really to land the joke. If you listen to the song and aren’t too up on your WWE Smackdown references or The Rock’s life, you might just think it’s a sexy song for some guy named Dwayne. The music, in this case, has a throwback, sexy kind of vibe, which in part inspired the choice to go for the classic ’90s Dwayne look as the reoccurring aesthetic of the visual, and it also informed the editing choices to go for those zooms and cuts scenes you see and to lean into the comedic side of the music.”

As far as the production crew goes, who did it include, and how did you put together the team?

“The crew for this video was an all-female team, largely made up of Canadian transplants landed in New York. It’s also important to note that this team is also made up of friends, and it would not have been possible to pull this off without their talent, energy, love, and support. Every piece matters, and not only did they each nail their respective pieces, it was also an incredibly hilarious and fun day. To make art with people you love is a big gift, and this was certainly one of those moments.”

The team is as follows: 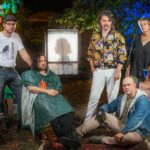 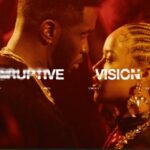