Rising alternative act Elita announce their debut album, Dysania, set for release on March 22, 2023, via Opposition. The news comes with the release of the second single, “Mentally Not Here.”

The band features Elita on vocals, Tim Rypien on guitar/keyboard, and John Eddy on guitar/slide. Their new music builds on the dark, haunting subjects of their past projects with songs that tie in themes of anxiety and depression with the supernatural.

“This song is existential dread. Feeling drained by the impending doom of an apocalypse. The cursed beat and dissonant melodies put you on edge. It sounds like lo-fi hell hounds started a band and recruited a disillusioned angel to be their singer.”

“Mentally Not Here” follows the album’s first release, “Sleep Paralysis,” which featured an eerie music video, fittingly released during the week of Halloween. 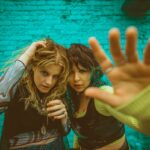 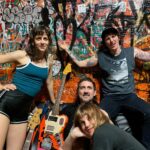