The Retaliators is a blood-soaked revenge film with a good soundtrack. The film introduces us to John Bishop (played by co-Director Michael Lombardi), a semi-cool young pastor and father of two, who has cool bands with blue hair playing Christian rock to his congregation in between his sermons.

After overhearing a man trapped in the trunk of a car by our film’s protagonist (played by Joseph Gatt) at a gas station, Bishop’s teenage daughter Sara (played by Katie Kelly) is killed in one of those “wrong place, wrong time” situations which sets the film in motion.

While grieving his daughter’s death, Bishop meets a detective named Jed (played by Ozarks actor Marc Menchaca) who wants to help him bring Justice to his daughter’s killer. Jed has hidden intentions that soon become clear to Bishop. Jed captures Bishop’s daughter’s killer and puts his life in bishop’s hands. Without giving too much away, Bishop comes to learn Jed’s twisted past and discovers there’s more to his plan for revenge.

This film has some really awesome gore sequences wrapped around a lacklustre and clumsy storyline. The film comes off as more of a crime thriller in the first two acts, then takes a huge turn into this “subhuman zombie-like deranged killers” mode.

It reminds me a lot of American Satan, a film made by a record label that tried really hard to be taken seriously. At first, I’m like, “oh cool, maybe this will be like Death Sentence or Death Wish but with Hostile–like ultra gross murder porn-like gore,” but then the film takes a weird turn into an overly ambitious zombie-like flick with no zombies.

All in all, I’d give this movie a solid 5/10 based on Michael Lombardi’s performance, the soundtrack, and all of the heavy music-heavy cameos.

AJ Diaferio is best known as the frontman for the hard rock band We’re Wolves. After garnering interest from millions of fans with their renditions of beloved active rock tracks, the group created their niche within heavy music with their debut album Evil Things. Aside from being the band’s fearless leader, AJ is a self-proclaimed horror enthusiast and movie memorabilia collector. It is evident that Diaferio’s fiery passion for movies and music is intertwined in every aspect of his work, making him a prime source for the latest in all things horror. 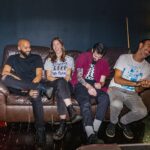 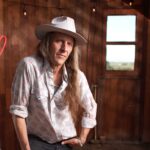 Archer Monk in 2022, photo by Matt Clarke
Next Post