Another big September show hit Toronto with The Killers and Johnny Marr taking on the Scotiabank Arena. Marr hit the stage with his signature bright yellow Fender Jaguar guitar and brought with him a few gems by his long-defunct but still as popular as ever band, The Smiths. The crowd was still making their way to the venue and was much more sparse than expected for such a big artist. Might have been Friday evening traffic and the fact that The Weeknd was playing just down the road and his 50,000 fans were also clogging up the area. Those who made it for Marr’s eight-song set were treated to Smiths hits like “Panic,” “There is a Light That Never Goes Out,” and “How Soon Is Now.”

As the lights dimmed, the video wall lit up with the album art from The Killers’ Imploding The Mirage.

“I just wanted to get back to the 4-1-6,” crooned The Killers frontman Brandon Flowers as the haunting keyboard pad sound signalled the building storm about to be unleashed on the packed house tonight. Confetti cannons immediately showered the bouncing out-stretched fists in the general admission floor section as “My Own Soul’s Warning” kicked into gear. The “Imploding The Mirage” Tour was delayed long enough that the band had time to write and record a second entire album, Pressure Machine, before being able to embark on the ITM world tour the fans were eager to see.

Flowers announced to the crowd that “Covid brought a lot of uncertainty, Covid forced a lot of isolation. Take a good look around. Ain’t nobody in isolation tonight. This is a superspreader event. We’re spreading Peace, we’re spreading Love, and we’re spreading Rock and Roll. Come and get it.” The 22-song setlist touched on six out of their seven studio albums, leaving Wonderful Wonderful out for another time. The band plays a number of core tracks at all their shows on this tour, swapping out a number of the remaining ones from show to show. It’s a nice touch to keep the show fresher for the band and for fans that travel to multiple shows.

The band has had some personnel challenges over the past six odd years. Bassist Mark Stoermer gave up touring with the band in 2016, as did guitarist Dave Keuning at around the same time. With this current tour, Keuning has re-joined the band. Drummer Ronnie Vannucci Jr, who’s been with the band since nearly the beginning, brought his ferocious style and finesse to the kit as he always does. The band has also brought a full complement of touring musicians along. Three background singers and two keyboardists combine with the core band to bring that enormous Killers album sound to the live experience. Could they get by with just the band members? Sure, but they’ve chosen to give the live show starved fans their money’s worth.

Flowers is the epitome of the sharped dressed performer, in a silver sequined blazer, black shirt, pants, and boots, with his signature perfectly coifed head of hair. Some might think that screwed-down wardrobe would weigh him down, but nope, he commands all corners of the stage, dancing, sprinting, jumping and leaning into the crowd for some up close face time.

The stage-spanning video wall backdrop was complemented with a smaller one in the form of a long platform running the width of the stage across the front edge of the stage floor. And that platform gave Flowers and Keuing two additional steps up over the crowd for a better look for the fans. Artwork from their hometown of Las Vegas, desert scenery and album art were displayed prominently. At centre stage on the front lip was a large, fully lit infinity symbol in front of Flowers’ keyboard. Flowers spend some of the show playing the intro or hook keyboard parts on that keyboard but mostly left it up to the touring players.

Their 2004 debut album Hot Fuss had the most tracks in the set, with “Jenny Was A Friend Of Mine,” “Smile Like You Mean It,” and “Somebody Told Me” as standouts in the main set. Imploding The Mirage, Sam’s Town and Day and Age had four, four and three, respectively. Battleborn and Pressure Machine both had one at this show.

Flowers brought a fan up onstage to play drums on “For Reasons Unknown.” Tom, from Toronto, definitely knew the assignment and played with the skill and confidence of a veteran rock star, complete with fist bumps and hugs from the band afterward and a selfie at centre stage with Flowers and the packed arena behind them.

They also played “boy,” the first new material since Pressure Machine. Pressure Machine has a distinct folk, heartland America vibe to it, which is somewhat of a departure from regular Killers material. “boy” is a return to the new wave, pop/punk, arena anthem rock sound that is loved by their fans worldwide. Not that Pressure Machine isn’t a stellar piece of work. It’s just different. It really is a masterpiece, and it’s actually a shame we only got to hear “Cody” played off of it at this show.

“All These Things That I’ve Done” brought the main set to a close with the full venue singing at the top of their lungs at the extended refrain “I’ve got soul, but I’m not a soldier” is and has always been a giant fan interaction part of a Killers show. The backup singers also brought the gospel choir vibe from the studio version front and centre live. If you’re looking for a solid stadium anthem, this one’s hard to beat.

After a short break, the band returned with Flowers asking, “how about a little Spaceman” standing behind his keyboard with the infinity symbol out front glowing brilliant blue. I keep saying anthem because they are just so skilled at the big sound, big stage anthem.

“We’re spoiled to death; we get to play with Johnny Marr every night on this North American Tour,” quipped Flowers with the shaky voice and fidgeting, nervous demeanour of a person who is genuinely in awe of an idol as he introduced him for the second encore song. It’s not hard to see why, though. Marr is considered one of the top critically acclaimed guitarists and singer/songwriters ever. “Stop Me If You Think You’ve Heard This One Before” from The Smiths had the place jumping, with Flowers doing a reasonable job putting his spin on Morrissey’s lyrics. Marr stayed onstage for the last tune of the night as well. For live shows, The Killers have been doing a mashup of arguably their biggest hit, the studio version of “Mr. Brightside” and Jacques Lu Cont’s “Thin White Duke Mix” off of the Sawdust album. And it’s called the 50/50 version. Starting with the slower dance beat remix sound, more monotone singing style and stripped-down music, the band plays most of the song. Then they stop for a split second with a giant Vannucci Jr drum slam, and then Keuing’s soaring guitar intro kicks the full-on studio version into gear.

“While we were waiting for the world to come back online, it seemed like it would never come. But here we are, glad to be back. We’re the Killers, and we’re brought to you tonight and forever by way of Fabulous Las Vegas, Nevada.” -Brandon Flowers 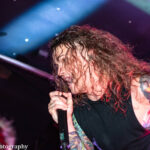 Miss May I @ The Palladium Upstairs on Sep 23, 2022, photo by Christina Altamirano
Prev Post 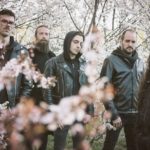