There’s punk, and then there’s riot grrrl punk, to which nothing can really compare. There’s a certain velocity and ferocity which just commands your attention, a chaotic, balls-to-the-wall energy that is completely unrivalled. One of the latest breakout riot grrrl superstars is no doubt Hex Poseur, who today is unveiling her brand new music video for her latest single “Gentlemen.”

The new song is off of her brand new EP Hearsay which was released in July via Manic Kat Records. This single is just blistering with attitude, bringing together Hex Poseur’s stylish blend of classic English punk and garage rock. Her forceful delivery is coupled with a forceful message, a vigorous commentary on well-established gender roles that just can’t seem to die off or fade away.

With her thoughts on the song and its messaging, the singer and songwriter shares with us:

“‘Gentlemen’ is definitely the most upbeat song on the EP. It’s the lightest in tone yet I think still has a strong message. The lyrics are very tongue-in-cheek, poking fun at the idea of traditional gender roles and the old-fashioned stereotype of a ‘gentlemen.’ While the ‘gentlemen’ may be the archetypal perfect man, he also brings with him old fashioned sexist attitudes. People today who label themselves as ‘gentlemen’ often seem to reflect these same attitudes and aren’t actually as chivalrous as they may want to appear. This song always goes down well with the crowd, because it’s high energy and a lot of fun. The hook seems to stick in people’s heads, so it’s often a fan favourite.”

For a project that only just began in just 2019, Hex Poseur has accomplished a lot. Hearsay is the follow-up to 2020’s two-part EP Keep It Quiet, with this sophomore release illustrating what she does best. Taking cues from PJ Harvey, Queens of The Stone Age, and The White Stripes, Poseur combines her riot grrrl energy with that more modern alternative sound. Just like what you witness on “Gentlemen,” Hearsay is just dripping with attitude, with songs that are an expression of disillusionment with modern-day politics, societal disparity, and the generally negative tone of our current state of affairs.

The recording process for Hearsay was intense, chaotic, and fun, and that created a lot of positive energy which was then funnelled into these songs. It’s an EP that’s a blast of anger, frustration, energy, and lightheartedness, certainly a winning combination for a rapidly emerging young artist. 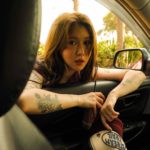 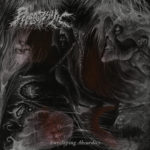