Relax those heavy eyes and rest that weary head of yours because it’s time to chill the hell out! Tatum Gale is pleased to release his brand new single “Viceroy’s Garden,” a delectable slice of indietronica that will please you in so many ways.

As this song may have already implied, Gale specializes in his own introspective brand of chillwave that is at once compelling and oh-so-satisfying. It’s proof that you don’t need shredding guitars or punishing drums to feel fulfilled by your music; sometimes, something nice and easy is just what the doctor ordered.

“This is a laid back, softly synthy exploration of the knowledge inherent in nature. It’s a little Royals, a little James Blake/Caribou.”

The song is an early preview of what’s coming on Gale’s debut full-length record titled Pretty Green. The album will be independently released next May and will consist of eleven tracks of charming, hypnotic vibes that marry together the worlds of indie and modern electronic music. Melding these musical styles together works very well for the New Orleans-based Gale because they are expressive and appropriately emphasize his love of the natural world, which is one of the primary goals of his songwriting. It’s a commentary on the human condition, with both analog and synthetic textures used in combination with found sounds or non-musical sounds.

Originally from Portland, Maine, Gale was primarily a jazz piano player as a youngster before he got into indie and electronic music. By his 20s, he was producing indie electronic while in college in Philadelphia before making the transition to working and living in Brooklyn. It was there he really began to find himself musically, producing and collaborating with notable local artists like Laura Jinn, Gabi Diaz, and FORQ. You can think of Gale’s music as a symphony of sound, original, unique, and incomparable. 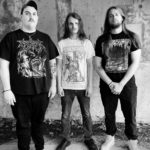 Track-by-Track: Molder Dig into Their Gruesome Album ‘Engrossed In Decay’