Comisar is back, and he’s Calling out for you with his latest EP. A guru of electronic beats and rhythms, we met the Colorado-based producer a couple of years ago, helping premiere his “Lights” single from his 2020 album Make Believe. Now a couple of years have passed, and Comisar issued Calling on July 29th via Gravitas Recordings. Taking you to a whole new musical world, the EP features organic, atmospheric textures over heavy bass tracks that know just where to let up. A true artist, Comisar looks for inspiration from all around him; nature, sound, noise, the sun, the stars, the sky… It’s all part of his creative process, which he can competently tie together, thanks to his mastery of the recording studio.

Calling features some of Comisar’s best production yet, a group of songs that he oversaw but also collaborated on with other artists. Each track features remixes of other bass artists who were specifically chosen by Comisar himself. That’s what makes this EP a journey through sound because it features so many different interpretations of sound and how it can be harnessed to create something truly grabbing and breathtaking.

To help support his latest release, we recently connected with Comisar to discuss everything except music. In the long-awaited return of our Quick & Dirty interview series, we asked Comisar, well, lots of random questions about lots of random things…

What’s the theme song to your life and why?

Comisar: “Vengaboys’ ‘We Like to Party!’ (The Vengabus). It just captures a certain energy that gets me all riled up!! I don’t think I could choose a very serious song as the theme song (laughs).”

Would you rather be a zombie, vampire or werewolf?

“Vampire is the best deal for sure. Live forever, bite people, run super fast, I’m in. I do have werewolf energy sometimes, though.”

“If I haaaave to choose, cats, to be honest. This is my baby girl Pyp Squeak, aka Gypsy, aka Miss Lady.”

If you were a stripper, what would your name be?

What quote would you put on your Tombstone?

Top three songs of all time?

“It hurts to leave so many others out, but maybe:

If you could hang out with a famous person (dead or alive) for one day, who would it be?

“Probably Rick Rubin. He is a great music producer and seems like a really grounded and wise person who would have a lot of insightful things to say.”

“I love some hot peppers with spinach and mozzarella, or maybe pineapple and jalapeno. Classic pepperoni smacks too every now and then.”

If you could be a cartoon character, who would you be?

“I would be Invader Zim because I feel like life is a big weird mission, and I’m just improvising. Also, electronic music makes me think of spaceship noises pretty often (laughs).”

If Hollywood made a movie about your life, who would play the lead role as you?

“I think Keanu Reeves would do a great job. Picture Bill and Ted b2b The Matrix, but it’s about a DJ.”

You just won a game show, and your prize is a dream vacation! Where are you headed?

“Everywhere if I could, but maybe I’d start with somewhere in South America like Chile or Brazil. It looks beautiful there, and I’d be having alllll the food.” 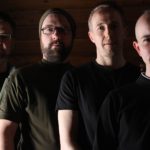 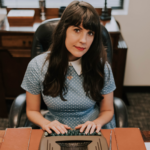 KellyMarie Writes About What She Loves; “The Office”