After dropping his latest single, “The Park,” back at the beginning of June, Danish singer-songwriter Nils Bloch returns with his debut five-song EP entitled In Amber Light. Released on August 5th, the record was written entirely by Bloch with some added cello flair from Runa Jold. Mixed by Oliver Holyoak and mastered by William Bowden, the album boasts high-quality, mellow indie-folk from a Berlin-based singer-songwriter with obvious talent and potential.

Read on to sample some tunes, and get to know this budding artist and his memorable, minimalist music via our recent Q&A.

Your new disc In Amber Light has just been released. Now that it is complete, how do you feel about it, and what has been the response so far?

Nils Bloch: “It’s a pretty overwhelming feeling, to be honest. More than anything, the release has been accompanied by a sense of closure. I’ve been working on these songs for quite some time, so to finally be able to release them into the wild has been amazing. The response has been great! People really seem to connect with the music. It’s such a powerful experience to create something and see people actually be moved and entertained by it. My main goal when I decided to release this EP was for it to go well enough for me to want to publish more music in the future. Not just in terms of streams, but also in terms of whether the music was useful to people; if they would engage with it. That goal has definitely been met.”

“I write mainly on guitar or piano. Usually, I’ll write the melody first, and then that melody will arrive with a few words or lines attached to it. Then I’ll start uncovering what the song is about and begin an arduous process of trying to figure out the lyrics, which is something I’m quite obsessive about. I make pretty minimalist music, and that minimalism means that I want everything to be on point – not a single note out of place, not one shabby lyric – because the details have nowhere to hide.”

“I don’t have a live setting in mind in the sense that I’m thinking about how to translate the song from a recording to a live situation since the type of music I do is so relatively easy to translate – I literally just need a guitar to be able to perform in front of an audience. But I do think about it in the sense that I don’t consider my compositions to be bound to particular recordings. One of the things that drew me to this type of folk-inspired music is that a song is like this metaphysical structure that materializes in a different way every time someone plays it.”

“The name ‘In Amber Light’ is taken from a line in the last song on the EP, and it has a few different meanings for me: There’s the amber light at sunset and sunrise. There’s the way amber preserves something. I think of the songs a bit like looking at insects trapped in amber, memories you can’t touch but that can hold up to the light and study. Then there’s a personal reference in that I wrote the EP in Berlin where the street lamps have this particular amber glow.”

“I’ve been enjoying my friend Andy Aquarius’ work a lot. He plays the harp and makes this blissful new age music that at the same time has a strong undercurrent of melancholy. His music is really serene, but I always have the feeling that there’s something a bit more sinister lurking beneath the surface.

“Another friend of mine just released an amazing album called Don’t Look Now with her project called Yr Lovely Dead Moon. It’s this incredible, poetic music that has a lot of political perspectives and these really intricate, fragmented song structures.”

If you were stranded on a deserted island and could only take 3 CDs with you for eternity, assuming there was a solar-powered CD player, what would they be?

“Songs of Leonard Cohen would have to be there. Not surprisingly a cornerstone of my musical upbringing. Cat Power’s The Covers Record for sure. The production on that record is near perfection in my ears. The vocal production, in particular, was a huge inspiration for In Amber Light. And, as always, her voice is just absolutely gorgeous. Then probably A Fragile Geography by Rafael Anton Irisarri. I love all his records, but this one has a certain shade of melancholy to it that I never seem to get tired of.”

If you had an unlimited budget, where and with whom would you record your record? What about Production and Mastering? And why?

“I’d really like to record with Jonathan Wilson in his studio. I had the pleasure of doing a couple of support gigs for him years ago with a band I played in at the time, and he is, first of all, just a really nice dude. He has a ton of vintage gear in his studio, and although I’m not particularly fetishistic about recording on tape or anything, I feel like he would be able to hone the tone of my voice and guitar playing. I think he would really understand the music I’m doing and be able to translate it in terms of engineering and mixing.”

“I suppose this was technically before my career actually started, but probably the night I decided to begin releasing my music. I played a small concert at an artist residency outside of Berlin, and everyone there was so super supportive. That was such an important night for me that gave me the confidence to actually take the leap and start publishing my music.”

This album is self-released; tell us about your experience going it alone as an artist. How hard is it to get your music distributed, promoted, shared, etc?

“It’s a lot of work! But I imagine the internet has made it a thousand times easier. I’m lucky in the sense that I quite enjoy doing all the stuff that surrounds the release: The visual aspect, press releases, Instagram posts, etc. But of course, it’s really difficult because I don’t have the stamp of approval that especially a bigger label would probably get me. People and media aren’t automatically interested in what I’m doing, and I don’t have access to the kind of network and experience that a label does. So there’s more luck and a lot of research involved. I’m really just learning as I go along. But at the same time, I personally enjoy being able to do things at my own pace, both in terms of waiting until I feel like things are ready or the other way around, not having to do things according to someone else’s schedule or to wait for anyone’s approval.” 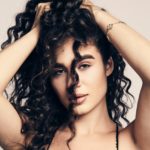 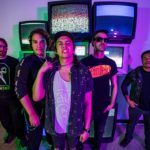