Between Exultation and Aggression is being billed by its creator/director, Jon Lambert, as “a documentary about the evolution, culture and stories regarding extreme music,” and as far as brass tacks and hitting the nail on the head with a description goes, that kills it. This film is bare bones and tackles the subject matter with no bullshit and even fewer frills. Sounds good? Unfortunately, that’s also the film’s biggest failing.

As is spelled out in the accompanying bio and background info, Lambert, like many of us, is wholly indebted to extreme music. Read between the lines, and it’s obvious that the chaotic noise of this sort that has scared the tar out of polite society has provided a soundtrack to the director’s life and plays a role beyond general entertainment, giving him “purpose and passion,” has provided a social life, mutual friendships, and identifying wardrobe/uniform and artistic avenues (he also helms a metal-related podcast). Considerating all this, Between Exultation and Aggression is his contribution to the scene, a giving back to the world that has given him so much.

As such, the film jumps right into the subject with little fanfare and is about as stripped down as one could imagine.  From the off, the viewer is thrown into the fray with interviews on a topic, the first being stories of discovery followed up by opinions on the evolution of extreme music, the fans, culture and the future, as well as a segment on advice. That’s all well and good, but the presentation is where this doc stalls. Interviews are essentially static, single-camera jobs, generally with the speaker leaning against a wall with the occasional cut to live footage and back. It’s not that what’s being said isn’t interesting and informative, it’s the overall absence of even rudimentary film techniques that fail to give this any dynamic beyond an extended seminar or lecture. As well, the lack of narrative flow has many of the segments droning on unnecessarily.

The film is structured in chapters: a topic flashes on the screen, and dudes start yapping about that piece of the puzzle. There are revelations, interesting tidbits and themes that rear their heads, but stronger and punchier points could have been pulled from the interview material and edited to make for a much more palatable flow. Points pertaining to the generation gap and the sacrifices involved in touring could have been focused on and expanded upon.

The stories of discovery from the likes of members of Cattle Decapitation, Napalm Death, Exhumed, Incantation, Municipal Waste, Obituary, Midnight and Nuclear Assault/Brutal Truth are relatively similar enough to each other but dissimilar enough to those of members of younger bands like Gatecreeper, Frozen Soul, Undeath, 200 Stab Wounds, Skeletal Remains, Shadow of Intent, Bodysnatcher and Sanguisugabogg. For example, an obvious difference comes to the fore when older dudes talk about the importance of tape trading in their discovery of extreme music, whereas the young’uns discuss the pivotal role of the internet. The lack of comparison and contrast exploited by the filmmaker makes for a real wasted opportunity.

In fact, the generation gap is a very salient theme running throughout this, not just in the discovery chapter, but in how the world of extreme music is viewed culturally and socially, but none of it is examined in any context beyond generally having the older bands’ interviews chronologically appear before the younger ones. The interview clips could have been chopped up and edited to create a much better sequential flow as opposed to having people talk and talk and talk some more with all the “umms,” “likes” and “ahhs” left in.

Especially head-scratching is the chapter on fans and culture. Not for the interview content, but because random crowd scenes from MDF 2022 make up the majority of the visual accompaniment and have little to do with the voiceovers. If one weren’t already a fan and knowledgable about extreme music and culture, someone would look at this segment and think, “what the heck is up with these tattooed clowns half-skipping, half-cantering and bodychecking each other in a parking lot, then buying patches when they obviously already have enough patches?” The disconnect between the two halves of the presentation is conspicuously jarring. Additionally, there are interesting things being offered up, but unless you’ve already made yourself familiar with all the voices in the first hour of the film, there’s little to no indication of which disembodied voice is saying what.

That’s not to say this is a total wash. There are stories that run the gamut from interesting and hilarious to deeply personal and heartwarming. As mentioned above, definite themes are at play pertaining to the divide between young and not-so-young, technological advancements, and life and business off the stage and behind the scenes. They just needed to be zeroed in on and appropriately targeted via better editing and synch-ed up striking visuals. At nearly three hours in length, this is definitely a single-sitting chore, but the material is there such that it doesn’t have to be that way. 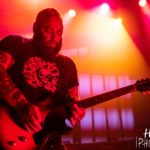 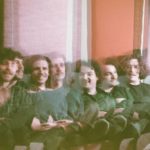