It’s not easy pulling double duty as both a talented actor and musician, which is why so few can capably succeed at it. One of these rare exceptions, however, is Omar Doom, who has enjoyed a very fruitful 15-year career as an actor, and for the last several years, has been releasing music under the pseudonym Straight Razor. Doom is perhaps best known for his work with the brilliant writer and director Quentin Tarantino, who has cast Doom in several of his films, including Death Proof, Inglourious Basterds, and most recently Once Upon a Time in Hollywood.

And while he has become best known for his acting work, Doom is really beginning to emerge as a musician. Music was actually his first love, aghast as a child at the classic Indian music to which his parents exposed him, as well as horror movies soundtracks, and the popular artists of that time such as Michael Jackson and Madonna. Doom’s first release under his Straight Razor moniker was in 2013, when he put out an EP of the same name on Lil Death Records. Now, Doom has again reemerged with more new Straight Razor music, with a new EP titled Vol. 2 out today, Friday, June 17th, via Negative Gain Records. This is the second in a series of EPs which Doom has planned.

We recently caught up with Doom to discuss Straight Razor, the new EP, getting support from the local music scene, and his most memorable moment thus far.

For those not familiar with you or your band, can you tell us a little bit about yourself?

Omar Doom: “I’m an actor mostly known for my work with Quentin Tarantino in movies like Death Proof and Inglourious Basterds. I’ve been making music long before acting, however, having played in bands most of my life. My latest foray into music, Straight Razor, is a techno/industrial/EBM solo project. After a few singles and remixes, I put out the Vol . 1 EP in summer 2021, with Vol. 2 coming out on June 17, 2022.”

“I usually start with the drums and work from there. I start the track at home, and then once it’s close to finished, I start testing it with different speakers, sometimes taking it to different friends’ studios.”

Your sound is very heavy. How does it make you feel when that power and energy you channelled in the studio come to life in front of a crowd?

“I make my music to be played loud, so it’s nice to hear it through a good sound system. A good crowd definitely helps too.”

What’s the story behind the Straight Razor name?

“I’m a big fan of the stylistic European slashers dating back to the 1960s known as Giallo’s. Common tropes in Giallo films include a black-gloved killer with the weapon of choice often being a straight razor. I’m also influenced by the music of Giallo films composed by people like Riz Ortolani, Claudio Simmonetti, and Fabio Frizzi.”

“While playing shows over the last couple of months, I was introduced to new music by people like Moris Blak, 𝕯𝖊𝖘𝖙𝖗𝖞𝖚𝖗, and Corvad that I’ve been listening to a lot. Check them out if you don’t know them already (you probably heard Corvad on The Batman soundtrack). I ended up doing a remix for the Corvad Unreal Remixes album that is out now.”

“The support from the community has been strong. As soon as I started touring, offers from event promoters started coming in left and right. You can expect to see more of me in the future.”

“Attending the Cannes Film Festival with a Tarantino film is something I’ll never forget. I actually got to do that twice for both Death Proof and Inglourious Basterds.”

What is the strangest thing that has happened to you on tour or at one of your shows?

“I’ve played some strange places along the way, including some with areas dedicated to S&M and bondage. I watched a very shy-looking guy who could’ve been a school teacher walk in and was waiting to see how he would react. I couldn’t find him for a while until I realized he was voluntarily chained up and being whipped. It’s always the quiet ones.”

Do you use the same gear when recording as you do when playing live? If yes, what and why? If no, then why not?

“I mostly used CDJ’s in the past. Lately, I’ve been doing shows using Ableton, which is actually what I used to make everything. With Ableton, you’re able to use solo instruments on the fly and make live remixes which can be a lot of fun.”

“If I could have my way and work with anyone live or dead, I would work with Giorgio Moroder and Ennio Morricone. We would record our masterpiece in Hans Zimmer’s studio (his input is welcome). If you’re not familiar with his studio, definitely look that up.”

Politics and music. Yay, nay or what the hay?

“I haven’t been too political with my music. It’s mostly instrumental thus far, but you can expect to hear more vocals by myself along with guest vocals in the future.” 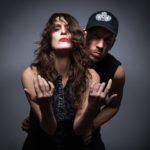 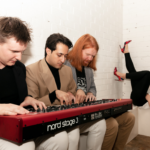