Some writing and recording duos are matches made in heaven. You can add Brendan McHale and Christian Turzo to that pile, the two-headed monster that comprises Echo Kid. The two longtime friends and partners have released their new music video today for “Kano” from their latest record Fever Dream, which came out last month.

As with so many artists, the pandemic allowed McHale and Turzo to hole up together in one spot and not worry about anything except writing and recording to the best of their abilities. Joining forces in their Philadelphia studio, they have delivered a really rad record with Fever Dream, a statement-like album that really emphasizes what a strong writing team the pair are.

McHale and Turzo have crafted a whole story that explains the inspiration behind “Kano” which they have shared with us today:

There’s a saloon on the western plains of the silver moon that stays open late, all lit up in fluorescent lights with a band that plays all night long. All manner of creatures large and small come a stumblin’ thru in the night, looking for a drink or a place to rest, trying to catch a glimpse of Margaret behind the bar, chain smoking cigarettes and teasing her brother bill for spilling red wine on his shirtsleeve. Bills a priest but he comes in often because he loves the décor and the dark color of the wooden walls. Just then the doctor comes in all dressed in white high as a kite mumbling something about Draino as he shuffles over to the bay windows and pulls back the red velvet curtains. ‘Hmm, not light yet…I’ll have another cap’n.’ Margaret serves him reluctantly but she needs the money to pay for her aquarium.

“Kano appears like a vision in a dream, a distant familiar flash of memory reverberating in real time, an echo from the past piercing thru the present moment like a knife. She seems to float across the floor, a peculiar look in her eyes, like she’s dreaming of somewhere else far far away. She glides to the corner booth and sits near the window staring out at the night, completely immune to the kindness of strangers. She wears a blue dress, her hair all adorned in spring flowers. She looks the same but different. It’s been a long time, she’s got kids now, and you do too, but the old spark is still there. ‘Kano why’d you leave me?’”

The story continues as follows:

“You fill your lungs with smoke and someone tells a joke but it’s not that funny cause you’ve got no money and on top of that you ain’t got her. You tell yourself all sorts of stories, you start to believe there’s something you could’ve done to reach her back then. Right time wrong place. That was a long time ago. The museums are all closed now. The sun is coming up.

“This is not rock n’ roll. It’s mathematical vision music all painted in gold and blue and translucent red. There’s nothing left really to hold on to. The only thing to do is to turn off your mind, relax, and float downstream in the river of clean time. let the waters of Devine love wash away all the bloody newspapers and cheap regrets of Saturday nights spent stumbling through the empty chasms of your mind drunk on wine, singing the same old sad songs. The streets are empty, the flowers are planted. Everything that dies someday comes back, you’ll see her again down the road apiece.

“Just then the doctor steps on your foot trying to fiddle with a broken bar stool; ‘Sorry friend it was an accident.’ ‘That’s alright man, by the way do you have a dollar?’”

McHale and Turzo first met when the two were in the Philly garage rock group RFA. They developed Echo Kid via their shared love of raw-sounding rock n’ roll that utilizes DIY recording techniques. They began writing for Echo Kid in 2019 while living together, but it wasn’t until 2020 that they came up with the project name. It’s dubbed after one of their favourite all-time albums, Nashville band Turbo Fruits’ Echo Kid. Turzo had previously helped McHale record his albums, which made the recording process behind Fever Dream very natural and organic. Fever Dream is the follow-up to Folks at Home and it shows very clearly that this writing duo is together for a reason and just getting started on a long, productive musical venture. 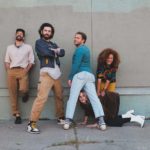 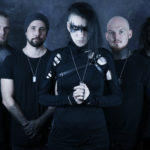